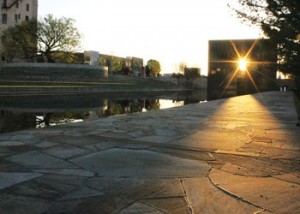 The sun rises on the Oklahoma City National Memorial in downtown Oklahoma City. April 19, 1995 marks the 20th anniversary of the bombing of the Alfred P. Murrah Federal Building, which took the lives of 168 people. (Photo by Alan Chapman)

It’s been 20 years, but the memory of that morning – a day that started like any other and ended with loss and destruction – is as brilliant, as vibrant as it was then.

“It’s still almost impossible to believe that a day like that could start out so normally – I mean there was no premonition, no feeling, no inkling of what was going to happen,” Melva Noakes said. “That was something that always surprised me.”

It was April 19, 1995. The perfect sunny day didn’t last long; at 9:01 a.m., a truck packed with fertilizer would explode just yards from the America’s Kids Day Care, housed on the second floor of the Alfred P. Murrah Federal Building. It was a daycare center taken over by Noakes and her staff less than a month before the bombing.

“It was just so surreal, really – we had gotten the contract in the federal building, and we were so excited to have the opportunity,” Noakes said. “Then, it was just gone – just like that.”

Noakes’ journey to that dark place was one that ironically, until that day, was full of joy and light. It was a life centered around caring for children, first as a foster parent with her husband, Warren, and then as a daycare operator, beginning in about 1978 with the opening of Noakes’ Christian Day Care. By 1994, the couple owned and operated six centers.

“It was just always what I felt I was meant to do, it was something I loved so much,” Noakes said. “I loved knowing that I could make a difference in the lives of these little ones.”

That was what led Noakes to the Murrah building and a contract with the General Services Administration, the federal agency that handles building maintenance and similar issues. The Murrah building’s previous daycare operator had issues with the Department of Health. Facing numerous citations for a variety of problems, it closed – leaving an opening for someone who wanted to step in with a new facility. Noakes said the moment she and director Dana Cooper stepped into the center, they both knew it was the perfect opportunity.

“Dana was so excited, she had so many ideas, and she had made such an impact on our other centers that I knew it would be an excellent addition,” Noakes said.

And it was everything they had wished for, Noakes said. The building catered to parents who worked nearby, many who came over to the center for lunch with their children. The daycare’s large glass windows lining 5th Street were perfect for the babies’ cribs, where they could look up at the clouds. All of the children loved standing at the windows looking at the world go by, she said.
“People would deliberately go by that way so they could wave at the children – UPS delivery men, business people, I loved coming around the corner to park and seeing them there, all waving at me,” Noakes said.

Cooper, 24, had left her mark on all of Noakes’ centers. The daughter of a teacher, Cooper planned to pursue that career herself, and had fallen naturally into the role of center director, as well and friend and confidante to her boss, Noakes said.

“She was just one of those people who had a sparkle about them – she was so positive, so joyful,” she said.

The afternoon of the bombing, Noakes and Cooper were planning to fly to San Francisco for a conference. Noakes was in the Choctaw center a little before 9 a.m., when she spoke to Cooper for the last time. In addition to the center’s director, Wanda Howell, 34, and 42-year-old Brenda Daniels were having a regular day with 21 children. Scott Williams, a Fleming Foods salesman, had just arrived with a delivery, Cooper told her.

“It was one of those regular, routine conversations,” Noakes said. “I was preparing the payroll and having some printer issues, and we just chatted a bit about the day and how we were looking forward to the trip.”

That trip would never happen, as it turned out. Just a few minutes after hanging up the phone, Noakes and her staff in Choctaw heard and felt the explosion. Although they could see smoke, it was unclear what had happened and exactly where – and the rumors and speculation immediately began to circulate.

“It was a gas leak, it was one of the federal buildings, there was just so much unknown,” Noakes said. “I spoke to my daughter and said there were a lot of buildings downtown, it didn’t mean it was ours – but we headed down there right away.
“The closer we got, the more sick I began to feel,” she said.

It was pandemonium as emergency workers converged on the scene and injured people began to emerge, Noakes said. While she came across a group of children from the YMCA daycare center, the people she was looking for – Dana and the others – were nowhere to be found.

“I was frantic, I just couldn’t believe I wouldn’t be able to find any of them,” she said. “I kept praying, I kept knowing there would be a miracle.”

Eventually, Noakes was asked to identify a child – filled with hope they had finally been found, a worker took her not to a hospital room, but to the morgue. It was then she knew there would be no miracle. Cooper, Howell and Daniels did not survive, nor did Williams, only there for a food delivery. Perhaps worst of all, 15 of the 21 children in the daycare that morning – including Cooper’s 2-year-old son, Christopher – were gone. The oldest of the daycare’s children at the time the bomb exploded was five year’s old.
For the most part, the six who survived had a long road to recovery ahead of them – all of them alive because they were in a center room with Howell at the time of the blast. Howell died as she had lived, with a child on her lap, Noakes said.

After the shock of the bombing began to recede, Noakes said she tried to move forward – a losing proposition because of the blast’s aftereffects. First came the news about the daycare’s skyrocketing insurance premiums and then there were the lawsuits, brought by the children’s parents.

“We were eventually vindicated, but it was so horrible, so exhausting,” Noakes said. “Some people actually said I knew something was going to happen and that was the reason I wasn’t there that morning.

“I understood the need to blame someone, but it certainly wasn’t anything I ever could have known about or prevented,” she said.
There was someone to blame, of course. It was Timothy McVeigh who parked that truck and who walked away, knowing that those windows where the children stood to wave at passersby were just yards away, Noakes said.

“I always knew he was aware of them being there – nobody could have missed them, and when I was approached by the media and asked if I wanted to talk to him (McVeigh), I knew there was nothing I could say to him,” she said. “It was between him and God now, I didn’t have a thing to say to him, and he didn’t need anything from me.”

There was healing and compassion too. People from across the country reached out to Noakes and her family, and she said the work of the emergency personnel and those dedicated to preserving the site and building a memorial to those lost were an inspiration. Noakes, encouraged by Warren and others, wrote a book about the daycare and the bombing. “April Mourning” was released by Tate Publishing of Mustang and helped the healing process, she said.

But, it was in deciding to get back to her own journey of helping others that she found complete peace, Noakes said. It was just along a different path than the one she started out on and believed she always would follow.

“I wanted to go back to service, to making that difference, and that’s when I decided to begin working with dementia and Alzheimer’s patients,” Noakes said.

On May 4, that goal will become a reality with the opening of Heritage Pointe Assisted Living and Memory Care in north Oklahoma City. Noakes, who will serve as executive director, said the center is a positive focus for people who can’t always remember the past – while the past continues to be a driving focus for everything she does.

“I remember them, I think about them – Dana, the children, the others – every single day, and I know what they lost, the lives they weren’t able to have,” Noakes said. “I don’t want to ever forget them, or for anyone to forget them, and I want people to know that what God gives you, man can never take away.” 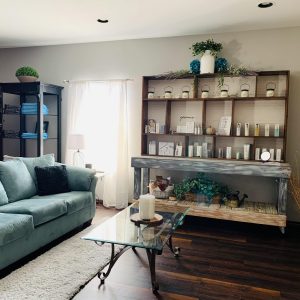