Midwest City is finally receiving some good news on the sales tax front.

For the first time in more than a year, the city reported consecutive months of sales tax growth. The city took in $2,783,615 in sales taxes this month, a 3.41 percent increase from last year. In July, the city received $2,654,271, a nearly 2 percent hike from a year ago. 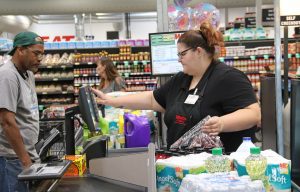 An employee helps a customer check out Thursday morning at the new WinCo Foods store in Midwest City. (Staff photo by Jeff Harrison)

Christy Barron, city finance director, said while city staff is pleased with the positive signs, she noted that at this time last year, collects were down 2.91 percent from projections.

“So we still didn’t collect what was budgeted for August 2016,” Barron said.

Midwest City is seeking to raise the sales and use tax rate by .75 of a percent. The additional revenue would primarily be used by the police and fire departments. The sales tax election is scheduled for Oct. 10.

Other neighboring municipalities have also seen gains in recent months. Del City took in $858,651 in July, an increase of 2.8 percent and $880,190 in August, an increase of 1 percent. Del City officials are also seeking to raise the sales and use tax rate by 1/2 of a penny to provide competitive wages for police and firefighters. The sales tax election will be Nov. 12.

Choctaw received $547,604 in August, an increase of 6.9 percent from last year. The city saw a 4.5 percent increase in sales tax the previous month.

Retired firefighter finds new way to give back