WARR ACRES – Winning back-to-back district titles has been the goal for the Midwest City football team this regular season.

And they took another big step towards that goal Thursday night as they beat Putnam City 32-14 and clinched a playoff berth.

Midwest City took control in the first half with dominate play on both sides of the ball. They scored 26 unanswered points and allowed Putnam City in the red zone once. The Pirates didn’t get on the board until the fourth quarter with a pair of scores against Midwest City’s second defensive unit. Midwest City improves to 7-1 overall and 5-0 in District 6A-II-1. Lawton and Stillwater are both 4-1 in district play and Putnam City drops to fourth place at 3-2 in district.

Junior quarterback Preston Colbert completed 15-of-18 passes for 319 yards and two touchdowns and ran for another. Juwan Walker led the team with eight catches for 150 yards. Caleb Collins and Jalen Redmond each had receiving touchdowns.

Midwest City struck first with a scoring drive on their first possession. Walker caught a 28-yard pass Cooks added a 20-yard run to set up a short TD run by Colbert. A missed extra point made it a 6-0 score at 8:35 in the first.

After punting on their next possession, the Bombers doubled their lead with help from Redmond. The defensive end showed he can play offense too, as he took a screen pass and barreled over defenders for a 45-yard touchdown and 12-0 lead.

The Pirates answered with a long kick return and red zone drive. Jawaun Bell caught a 17-yard pass on fourth down, setting up a first-and-goal from the 3. But the Bomber defense held its ground. On third down, Jalen Redmond saved a touchdown when he threw Amareion Newsome to the ground. Putnam City set up for a field goal attempt, but the holder couldn’t hang on a low snap.

Midwest City finished out the first half with big plays on both sides of the ball.

Colbert led the visitors on an eight-play scoring drive that was capped by a 4-yard run by Anderson. The quarterback then hit Walker for the 2-point conversion and 20-0 lead with 1:48 in the second.

Midwest City got the ball back when Tramon Jackson grabbed his first interception of the game. On the next play, Colbert connected with Collins for a 57-yard score with 44 seconds left. Putnam City stopped Colbert on a two-point try to make it a 26-0 halftime score.

After a sluggish third quarter, Midwest City returned to the end zone once in the final time. Anderson ran five times on the drive including his second touchdown of the game. That five-yard score put the Bombers on top 3-20 with 6:36 left.

Putnam City avoided the shutout with a pair of late scores by Keair Wilkins. The senior caught touchdowns of 8 and 58 yards to make it a 32-14 final.

Dorian Royal was the leading tackler for the second week in a row with 8 stop. Redmond had seven tackles including two for a loss and one sack. Jordan Jones and Israel Cotton-Embry had seven tackles each. Jackson had two interceptions along with four tackles.

Midwest City is back at home for its final two games of the regular season. They host Enid (3-5, 1-4) Friday night and Stillwater (7-1, 4-1) next Friday for senior night. 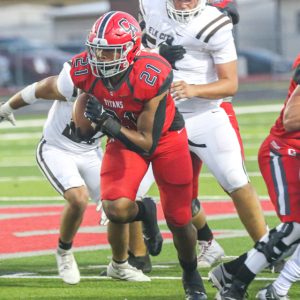