Shocked, frustrated, betrayed, confused and heartbroken were words parents and students of Dean’s School of Dance in Mustang used Thursday morning as they gathered outside the locked studio looking for answers. A “Closed. Please call again.” sign loomed over the studio’s door as dance parent Jamie Branan-Nalley tried to peek through the glass window.

“This is Mustang. How can something like this happen,” asked Branan-Nalley as she shuffled through printed recipients and email exchanges with the studio’s owner, Cody Dean.

Dean, who has not been heard from since last week, sent out an email March 27 to a handful of parents of the school’s students saying the studio’s operations “will cease immediately.”

With no explanation as to why, students were left stranded just two weeks before a competition they’ve been spending a year preparing for. Parents also claim they are out a collective $10,000 after they pre-paid for months of classes, costumes and competition entry fees.

“I would like to start by apologizing for being out of touch,” read Dean’s March 27 email. “Late Sunday evening I was incapacitated by a medical emergency… I began teaching in Mustang eight years ago, and I have been very blessed to meet a lot of amazing people along the way. Unfortunately, a variety of unforeseen circumstances have led to me having to make some of the hardest decisions I’ve ever had to make. As of today, Dean’s School of Dance’s doors are temporarily closed.”

“Are we getting our funds back,” replied Branan-Nalley on March 27 to Dean’s email, and within the hour, he replied, “Unfortunately at this time, I do not have all the answers. I’m doing everything in my power to iron this out to everyone’s satisfaction. I will have answers as soon as possible for everyone in regards to refunds.”

Branan-Nalley also questioned Dean if they would still be competing this season, to which he replied, “Unfortunately no, we will not be.”

Parents began scrambling, looking for a way to still have their children compete in the upcoming Dupree Dance Competition in Dallas slated for this weekend. Panic set in once parents were informed by competition officials that they never received the entry fees for the students even though parents claim to have paid their shares to Dean starting back in November 2017.

Some parents came to Dean’s defense saying this is unlike the man they know, including Lisa Foreman, who wrote on Facebook:

“Our experience (at Dean’s School of Dance) was nothing but positive. They are a wonderful family. I don’t know what happened with Cody but I won’t be sitting around judging him. When my family was having a crisis and my daughter was going to have to quit dance, it was Lisa Dean and later Cody that sponsored her so that she could continue with lessons.”

This story, however, isn’t about Dean’s character, but rather a dance community coming together to ensure Mustang’s youth do not lose their love for the art of dance.

Within hours of the of the news spreading that Dean’s School of Dance had close their doors, other dance studios in the Oklahoma City metro immediately began opening their doors to Dean’s students. Tilt Dance Company, Dance Authority Performing Arts, Velocity Dance Center, Top Hat Talent, Dance Unlimited, Dove Dance and countless others sent messages to parents offering opportunities for the misplaced students to continue classes.

The silver lining continued to shine as parents were also notified Thursday by Dupree Dance officials that students set to compete in Dallas this weekend will be allowed to still compete free of charge.

Once again, studios in the area opened their doors after hours to give students a chance to prepare for the competition.

Chaylee Estabrook is set to compete this weekend and said that even though she was upset about the studio’s closing on a level she can’t describe, she knows her dance future is “better and brighter,” especially since she and fellow dancers have been given the chance to still compete this weekend.

“I’m hurt, but it also feels like this is a new start for everything,” said Estabrook.

Parents said they have been in contact with law enforcement, including the Mustang Police Department, to help possibly recover fees they paid to Dean.

Records show Dean was arrested last week on an embezzlement charge and booked in the Oklahoma County Jail. He was later released on a $2,000 bond.

Online court records show that in 2015 Dean pleaded guilty to embezzlement and received a deferred sentence.

As of press time Tuesday, it is unclear if the arrest is related to the dance studio.

Dean did not respond to any inquires from the Mustang Times as of press time Tuesday.

The show must go on, and according to the dancers preparing for this weekend’s competition, it will. 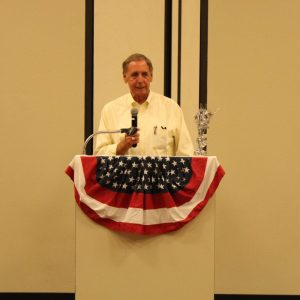