The Lady Broncos finished fourth in the team race and will join the boys squad in Saturday’s OSSAA Championships at Edmond Santa Fe High School.

Following the Broncos in the team standings were Tulsa Union, Bartlesville and Broken Arrow. 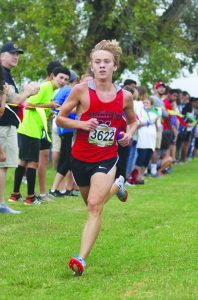 Simonsen continued his late season surge toward the magic 15-minute mark with a winning time of 16:25.64 to give the Beasts from the East of what they can expect next week in Edmond.
In the Mustang junior’s wake were Spencer Hales of Bartlesville in 16:45.85, Andrew Lafitte of Jenks in 16:59.32 and Jaxson Leming of Broken Arrow in 17:07.11.

Jenks, Owasso and Sapulpa finished ahead of Mustang in the team standings.