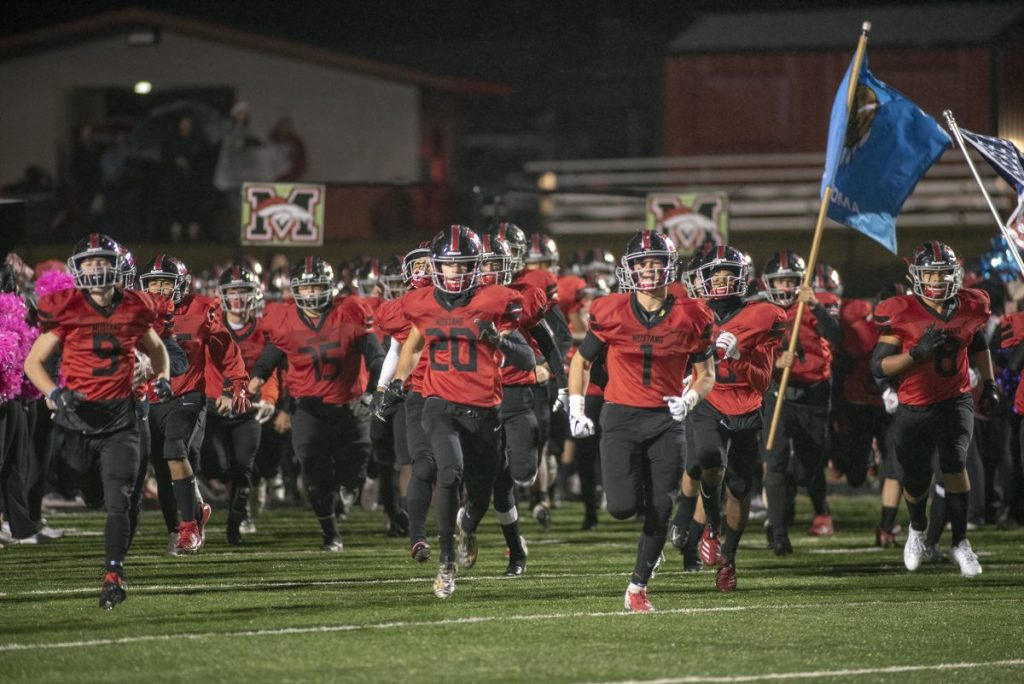 The Mustang football team races onto the field last Friday night before a game against Owasso. It was the Broncos final home game of the regular season. (Photo by Alan Chapman)

The Mustang Broncos football team will travel to north Oklahoma City on Friday night to take on the Putnam City North Panthers in a district battle that has large playoff implications.
With two weeks remaining in the regular season, five teams remain in contention for four playoff spots in District 6A-II-2. Owasso is the lone unbeaten team at 5-0. Moore is alone in second place at 4-1 and Mustang, Tulsa Union and Putnam City North are all 3-2 in district play.

There are an astronomical number of scenarios that could happen in the next two weeks, but one thing that is an iron clad lock is that if the Broncos win the next two games, they will be a high seed in the state playoff tournament that begins November 9. Mustang controls its own destiny.

Four teams will vie for three open slots, under the assumption that 5-0 Owasso is already locked in. Moore, Mustang, PC North, and Tulsa Union will battle for second, third, and fourth; the fifth place team is done for the year.

This week’s opponent, Putnam City North, has a 6-2 overall record, their only losses coming to district rivals Moore and Union.
Broncos coach Lee Blankenship has a lot of respect for what the Panthers can do, both offensively and defensively.

“They run a spread offense and have lots of weapons,” said Blankenship. “They like to throw the ball.  They run a 3-3 Stack defense designed to stop the run.”

Blankenship disagrees with the notion that there is added pressure as the playoffs get closer.

“We will focus on controlling what we can control – attitude and effort,” said Blankenship.  “Everything else will take care of itself if we focus on that.”
The game will kick off at 7 p.m. at Putnam City North High School.  The updated score of the game will be posted on the Mustang Times Facebook page.