Both Carl Albert teams and the Del City boys qualified for the OSSAA Class 5A Cross Country Championships at Edmond Santa Fe on Saturday in regional qualifying meets at Norman and Sand Springs. 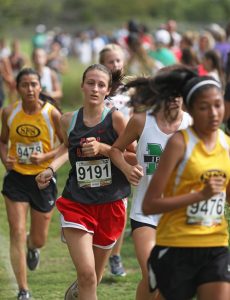 The Lady Titans placed three runners in the medal round and finished third behind Piedmont and McGuinness in the meet at Norman. The Titan boys and Del City each nabbed the seventh and final qualifying meet.

The MCHS Bomber boys competed at Norman but did not advance any runners to the State Meet.

Also contributing for the Lady Titans were No. 18 Kaley Plouff in 22.33 and No. 27 Riley Scholen in 23.02. Displacers Kayla Hardy and Madison Barren will also advance to State.

Del City qualified for the State Championships Saturday with a 7th place finish in the regional qualifying meet in Sand Springs.

Other members of the state-bound Eagles squad include Joshua Bagy in 19:24.86, Elijah Veach in 19:51.03 and Michael Simmons in 20:14.05. Displacers who also qualified to accompany their team to state include Aaron Brooks and Omari West.