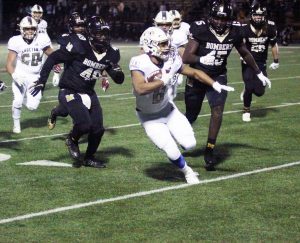 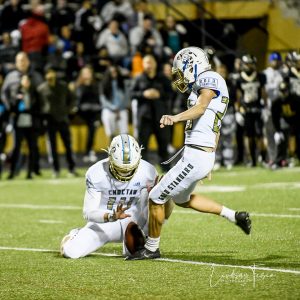 Choctaw claimed a 42-41 double-overtime victory over neighboring rival Midwest City Friday at Rose Field.
Senior linebacker and Oklahoma State University commit, Jeff Roberson, snagged a game-winning interception to ruin Midwest City’s 2-point conversion attempt in double overtime.
After a back-and-fourth first half Choctaw’s defense would open up the second half putting the Yellowjackets in prime position to take the win. However, Midwest City seemed to conjure up all the “Bomber Magic” they could as they clinched a tie by the end of regulation.
Midwest City kicker Elliot Janish put the Bombers on the board first when he hit a 31-yard field goal. Janish added a 43-yarder to push Midwest City to a 27-21 lead going into halftime.
Choctaw’s defense showed up big in the second half as the Jackets repeatedly killed the Bombers’ drives to capture the lead.
Gabe Johnson had a 30-yard pick-6, and on the next Bomber possession Angel Ackerman grabbed a 22-yard pick-6 of his own.
Choctaw was up 35-27 when the defense stopped the Bombers on their fourth try at the end zone giving Choctaw the ball at their own 1-yard line with five minutes to play.
The Bombers were able to stop Choctaw’s drive and quickly put together some offense. A catch by Midwest City’s Brian Wilson Jr and a 2-point catch by Deangelo Irvin Jr with 1:15 remaining pulled the Bombers back into the contest.
The Bombers were able to tie it up 35-35, while Choctaw went for what would have been a game-winning field goal from 39 yards as the clock expired.
Senior kicker Jacob Dunning sent it straight up the middle, and it bounced straight up off the top of the crossbar. However, what first appeared to be a good kick ended up bouncing backwards away from the uprights.
The officials’ signals ruined a short celebration on the CHS sideline and initiated one on the opposite side.
The game went to OT, 35-35.
In overtime, the CHS defense stopped the Bombers. Then CHS looked to go straight for the field goal, but the Bombers had a scheme for that. Midwest City intentionally drew flags before Choctaw’s snaps voiding what would have been game-winning kicks and on a final attempt, with the ball closer to the end zone, the Bombers got the FG block sending it to double overtime.
In double OT Chase Jackson got pushed across the goal line by nearly the entire offense. Then Dunning nailed the PAT.
Midwest City’s Kristawn ran in for an answering TD, but the Bombers went for the win setting up Roberson to take it away.
Choctaw won, 42-41.
“We had chances to do it early, but the best team won. Our kids don’t flinch, just keep swinging and never bat an eye,” said Choctaw head coach Jake Corbin. “That’s our standard and they continuously do it.”
The Jackets are now looking to finish the regular season with a win over Deer Creek at Senior Night, which would guarantee a playoff berth.
“It feels great to get a win like that. To come out and battle, and just never quit feels good,” said Senior QB Thad Williams.
“We know Deer Creek will be a dog fight, but we know we can win dog fights. As for the playoffs, you just have to get into the dance. If we play like we did tonight we might surprise some people.”
CHS coaches are proud of the season thus far, and are ready to honor this year’s seniors with a 7 p.m. kickoff Nov. 8.
“Our kids are champions. I wouldn’t trade this group for any other group in my life. They’re doing things that are challenging and they’re not flinching. As a head coach you try to raise warriors and champions for life, and these guys are champions now and will be for life,” said Corbin.

The district win brought CHS to a three-game win streak. The previous week Choctaw had claimed a historic third win over perennial power Lawton, while Friday’s double overtime shocker was the third time ever that Choctaw has downed the Bombers. The victory secured Choctaw’s place as No. 3 in district standings moving into the final week of the regular season.
“It feels awesome to do things Choctaw doesn’t do very often. That’s why our motto is ‘Built Different’ and we play like we are,” said Williams.
Choctaw gave up decisions to Putnam North (6-3, 3-3) and Del City (8-1, 6-0) earlier this year, and coaches felt those were both winnable contests.
The turning point of the season seems to have come out of what was Choctaw’s biggest loss to No. 1 Stillwater (9-0, 6-0).
“After the Stillwater game we said we were going to rattle off four straight. Now we’ve done three and got one left. Something unseen happened in that Stillwater loss, we lost together,” said Corbin. “We have a young team, and they’re starting to grow up. They’re buying in and starting to believe, and I just couldn’t be more proud of them.”