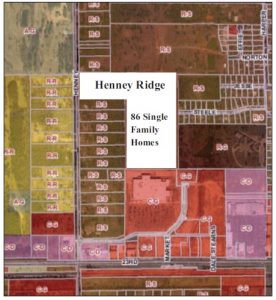 During the final regular Choctaw City Council meeting of October a public hearing was held to address the Choctaw Planning Commission’s recommendation to approve a superimposed zoning of planned unit development for the proposed Henney Ridge housing addition.
Despite a group of concerned neighbors in attendance to voice their opposition, city officials approved the developer’s request for a one phase PUD proposal to allow progress on the neighborhood to be built north of Walmart.
The new addition will feature 86 homes on 27.2 acres north of Walmart.
Concerns voiced were increased traffic on Henney Road, safety issues with neighborhood children being able to access a nearby creek from a proposed playground and a general concern that developers may be taking advantage of Choctaw by overbuilding on limited land space.
Representatives from Arc Engineering Consultants, out of Deer Creek, were in attendance to speak on behalf of the application submitted by St. James Place LLC.
“The lot size limitation in standard residential zoning is 10,000-square feet, while most of our lots will 65×140 which is 9,100-square feet. It’s not much less, and our smallest lot will be 8,100-square feet. We have 86 lots on our preliminary plat, and that’s roughly what we’ll have. We can’t fit 100 in there. That’s 3.16 lots per acre. That’s not a lot of density, and we feel it works well for this area,” said Arc Engineering Consultants representation.
As stated in the PUD application, with the existing single family residential zoning 27.2 could allow for 118 dwelling units at 10,000-square feet each. However, the submitted plans call for just 86.
They also addressed the concerns with increased traffic, and safety around the planned playgrounds.
“It’s our understanding the city knows this road will be a major arterial with Walmart and everything going on in that area. They’ve done several traffic studies over the past few months and are working on addressing the traffic on Henney,” they said.
“There are some recreational areas and water retention areas planned that could feature picnic areas or playgrounds. The developer could put up some signage warning about the creek or we could remove those from the plan. The playground and common areas were efforts of the developer to add value to the community, but we can take those out if safety is a concern.”
City Council affirmed the planning commission’s recommendation of approval, because the developer’s plans were similar to the single-family residential district already in place for the property and complied with the city’s comprehensive master plan.
“It’s a tough balance between the citizens and the developer that now owns that land,” said Mayor Randy Ross. “He has certain property rights as a land owner.”
The council agreed the developer’s efforts to connect to city water and sewer, build useable green space for residents and build lots larger than nearby already existing additions such as Choctaw Creek and Choctaw Trails qualified the proposal for approval following recommendation by the planning commission.