Jackets dominate Deer Creek to place No. 3 in District 6A-II-I

With a dominant win over Deer Creek, 62-34, Choctaw finished the regular season No. 3 in District 6A-II-I.
The Yellowjackets (7-3, 5-2) are now preparing for their first playoff appearance since 2015, which will be the school’s 16th trip to the postseason.
Choctaw scored first on Deer Creek at Senior Night 2019 when quarterback Thad Williams connected with Deysean Moore to put the Yellowjackets up early.
Choctaw’s high-powered offense wouldn’t slow down as a pass to Chase Jackson would extend the lead to 14-0 by the end of the first quarter.
However, it wasn’t all about the explosive offense, as Choctaw’s defense was once again making big plays such as a near pick-6 by Jordan Mukes. Mukes ran the ball down to the one-yard line, while on the very next Deer Creek possession Jeff Roberson would snag his own interception and run it all the way down the Antlers’  21-yard line. That set Moore up for an easy TD, and Choctaw was up 35-7 with just under two minutes until halftime.
At the break it was Choctaw’s game, 35-14. 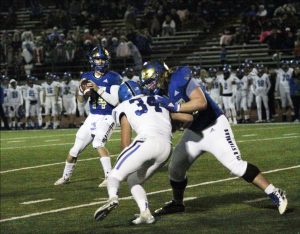 However, Choctaw wasn’t’ slowing down.

Choctaw’s explosive offense couldn’t be stopped in the second half as the Jackets extended their lead to 62-34 by the end of the night.
With 653 total yards of offense, the Jackets racked up nine TDs.
With 16 passes the senior QB had 357 yards through the air, and ran for another 71 yards. Williams had eight TDs passing and rushed for one.
Jackson had 246 yards receiving for two scores, while Gabe Johnson also had two TDs off of 72 yards receiving.
Cade Sanford had 28 yards off of two catches, and Moore had an 11-yard TD reception.
Moore led rushing with 138 yards and four TDs. CJ Smith had 48 yards rushing, freshman QB Steele Wasel had 20 and Johnson ran for 19.
A loss by eight or more points would have kept Choctaw out of the playoffs, while Midwest City and Deer Creek would have taken the spots. However, CHS made sure there was no chance of that with the dominant win.
With the loss Deer Creek (5-5, 3-4) finished fifth in the district play.
“This was a huge win for us. After the Stillwater game we said we had to rattle off four straight, and we just kept doing it. We feel like we’re playing our best ball right now. I’m proud of our kids and their resiliency. Deer Creek is a really good team with great defense, but we try to major in explosive plays and we knew what was at stake in this game. We wanted to win outright,” said head coach Jake Corbin.
The Jackets are set to travel to Muskogee (8-2, 5-2) Friday night.
Muskogee has two losses on the season including a 63-21 loss to Bixby (10-0, 7-0) and a 32-29 stumble to Shawnee (2-8, 1-6).
Choctaw defeated Shawnee 49-21, while Muskogee also had a 19-12 win over Midwest City. Choctaw beat the Bombers 42-41 in double OT.
Choctaw is confident they’ll be prepared to handle Muskogee, but they wanted to spend Senior Night celebrating this year’s accomplishments and a big win to cap the regular season.
“All season long we’ve been aggressive and we’re not going to stop now. We’ll play Muskogee at Muskogee, and they’ll be a good ball club. Everyone is from here on out will be. We’re going to enjoy this win tonight and start worrying about them tomorrow,” said Corbin. “I’m not done coaching these guys. I want to be around them another week and continue to make history and just do things that haven’t been done. These are the best group I’ve ever been around. I’m going to cry my eyes out when they leave. I’m so close to them, and I’d do anything for them. They’re just a great group.”
Corbin made sure to give thanks and credit for the win to his players and assistant coaches.
“My assistant coaches work so hard, and have worked so consistently for three years now and it’s finally paying off. My assistant coaches deserve all the credit for wins. They do a great job, they love these kids, they’re great men of character and they know football. It’s so nice to see them and our kids having success,” said Corbin.
This playoff appearance will be the first trip to the postseason since 2015.
In 2014 CHS ended a 30-year postseason drought when the Jackets returned to the playoffs for the first time since 1984.
The last time Choctaw ended the regular season with a 7-3 record was 2014.
The last time Choctaw claimed a playoff win was 1981.
The Yellowjackets are expecting to see fans traveling in support of this historic game. Kickoff is set for 7:30 p.m. at Muskogee.