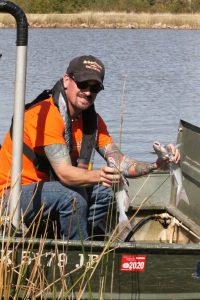 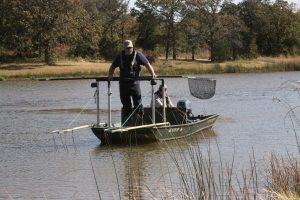 Keith Thomas and Steven O’Donnell, with the Oklahoma Department of Wildlife Conservation, were out at Choctaw’s Ten Acre Lake Oct. 23 to conduct a fish survey.
The pair of fishery biologists boated around the lake shocking the water, which temporarily stunned fish, allowing for capture and measurement before being safely released.
“We did a snapshot survey of the fish population. We were mainly looking for sunfish, bass and crappie. We haven’t done a survey here in several years, but we wanted to see how it was doing. It looks like we might need to help it out a little bit,” said Thomas.
The survey netted a two pound bass, some “keeper size” channel catfish, plenty of sunfish, bluegill and some nice size carp and gar.
When the ball fields were constructed at the Bouse Sports Complex there was clay runoff that turned the water red, and had a detrimental effect on the fish population.
“The city helped us put in some gypsum that settles those clay particles to the bottom, and it looks much better now,” said Thomas.
“After the muddy pond issue the lake has lost its weeds. The bass and sunfish respond well to those weeds, the saying is ‘grass equals bass.’ It still has sunfish that we stock several times a year, but we’ll see if we can get the bass doing a little better in there.”
Ten Acre Lake is managed by the Oklahoma Department of Wildlife Conservation through a Close-To-Home-Fishing-Program agreement with the City of Choctaw.
“The idea of the program is we’ll take care of the pond, and manage the fish if the city will take care of the park,” explained Thomas.
There are 42 Close-To-Home-Fishing-Program lakes on the department’s list, and two are in the City of Choctaw.
In addition to Ten Acre Lake, the pond in Choctaw Creek Park is also in the program.
“We stock fish, fill the feeders and do surveys every once in a while,” said Thomas. “We’re trying to get people out here to enjoy the outdoors. We also help with the fishing events out here if they want help. The idea behind the program is we want somewhere close to home that’s safe and enjoyable for kids to go catch some fish.”
With the recent change of the Choctaw Code of Ordinances, kayaks and canoes are now allowed in the lake, and the Choctaw Public Recreation Board and Oklahoma Wildlife Department hope this will help attract more public use of the lake.
“We just want people to come and enjoy the lake,” said Thomas.
The Close-To-Home-Fishing-Program will work to increase the fish population, and can also help the city install a fishing dock in coming years.
“We can help with a fishing dock if the city is interested. It’s normally a 75 percent and 25 percent thing. So if the city can come up with or find sponsors to cover 25 percent of the cost we get federal funds to cover 75 percent of the cost,” said Thomas.
Thomas says a nice quality floating dock, purchased with the federal fishing and boating access funds, comes in with a cost of around $30,000 installed.
His budget typically allows for one dock project a year, and the lakes in Jones and Del City are currently first and second on that list. Thomas has put Choctaw third on the list so if the city does want the dock and can come up with the needed funds estimated at around $7,500.

In addition to state fishing license requirements, some municipalities require daily or annual city fishing permits. Choctaw, Harrah and Jones do not have fees.
Close-to-Home fishing waters have the following additional restrictions:

2. All largemouth bass caught must be released (returned to the water) immediately after being taken; no harvest is allowed.

3. Channel catfish have a combined daily limit of six; no size limits apply.