By the time filing ends Dec. 4 for two Mustang City Council seats up for election next year, each will have at least one application on file. 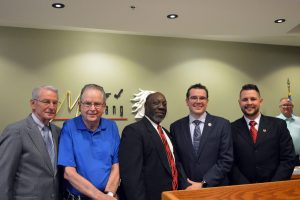 Ward V’s Travis McKenzie, center, and Nathan Sholund, Ward VI city councilman, both confirm they will seek re-election to their respective seats during the Dec. 2-4 filing period. The men were part of a historic election cycle in which five of seven municipal seats were up for grabs – a first seen in Mustang, officials say. (Photo by Traci Chapman)

That’s what Travis McKenzie and Nathan Sholund said last week, as both men confirmed they would seek re-election to the Ward Vs and VI seats they currently respectively hold. Both men were sworn in during a May ceremony, after an unprecedented municipal election that saw five of seven Mustang City Council seats up for election – a first in council history.
Candidate filing for the two posts begins Dec. 2.

City Council during its Nov. 5 meeting approved the resolution officially calling for the annual municipal election, each for a regular three-year term for the Wards V and VI seats. If necessary, 2020 election dates for the two council seats include a Feb. 11 primary and April 7 general election. Voters taking part in those election must reside within the boundaries of those respective wards.

Candidates must file their candidacy application in person with Canadian County Election Board in El Reno. Filing begins at 8 a.m. Dec. 2 and continues until 4:30 p.m. Dec. 4. The election board is located at 200 S. Bickford Avenue.

For more information about candidate filing, contact Canadian County Election Board at 405-422-2422 or go online to the Oklahoma State Election Board Office website, located at https://www.ok.gov/elections/.