Midwest City will recognize a special group of veterans next year during the annual Veterans Day Parade. 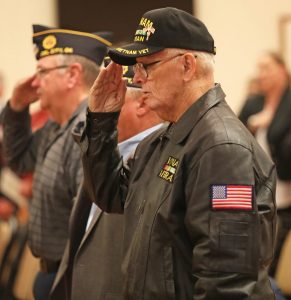 A Vietnam veterans salutes the flag Monday during a Veterans Day program at the Del City Community Center. (Photo by Jeff Harrison)

Mayor Matt Dukes announced Monday that next year’s parade will be dedicated to Vietnam veterans in Oklahoma. He said it is an important gesture to the many men and women who never received recognition for their service.

“Our goal is to give them the parade they never got,” Dukes said during a Veteran Days breakfast.

Next year will mark the 45th anniversary of the United States’ withdrawal of troops from South Vietnam. A total of  58,313 Americans died in the Vietnam War, including 22 from Midwest City. A memorial was recently built at Midwest City High School to honor their sacrifice.

Dukes grew up in a military family and later served in the U.S. Coast Guard. He remembers watching reports on the nightly news of war and the growing casualties. He said he was deeply troubled by the way military members were treated when they returned home.

“Returning soldiers, sailors and airmen were told not to wear their uniforms when they went off base,” he said. “I can’t imagine that. A uniform is a symbol of pride. They were spat upon and called baby killers.”

All Vietnam veterans are encouraged to attend the parade next year. Dukes said they are planning to have a few events before the parade to honor the veterans.