County officials step in to save 1907 county jail

It’s a fight to save history in El Reno, as officials continue to team with area historic groups to save a building in the Canadian County seat that’s withstood the test of time – but which could be lost to history if something is not done sooner rather than later, they say.

That building is the old county jail, a 1907 structure located at 300 North Choctaw – a building that illustrates Canadian County’s frontier past but one which, over time, has deteriorated significantly, finally finding use as a storage facility by Canadian County Sheriff’s office the last several years. 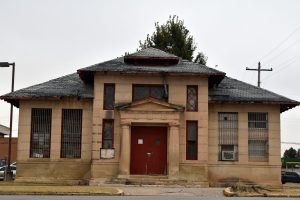 Extensive damage to Canadian County’s historic jail, built in 1907, is visible in a photo taken last week. Commissioners are teaming with Preservation El Reno and others to try to save the building before it is past the point of saving. (Photo by Traci Chapman)

As the building deteriorated, officials reached out to a group that could, perhaps, bring the building back to its former glory. Preservation El Reno played a significant role in saving and restoring several properties throughout the area; it was hoped the nonprofit could work its magic with the jail, as well.

That was the case with a second building at the jail site – the stables built shortly thereafter. Experts estimate that building was constructed between 1908 and 1913; it was listed on the National Register of Historic Places in 1985. It was through grants, donations and other work Preservation El Reno was able to restore the stables, now used for a variety of limited purposes and standing adjacent to both its crumbling historic neighbor and facilities built in 1984, expanded in recent years and used to house the prisoners of today.

“We’d hoped to be able to bring the county jail back so we could maintain the building’s integrity and have it as a showcase of what El Reno and Canadian County was like back in the late 1800s and early 1900s,” PER’s Betty Johnson said.

It was that goal that led Canadian County Commissioners to enter into a 99-year lease with PER in recent years, Commissioner David Anderson said. While commissioners share the historic nonprofit’s goal of restoring the building, the thought at that time was that the project was best left in the hands of an organization with the expertise and means to complete renovations and restoration.

While Preservation El Reno was successful in doing just that with the stables building, both the extensive damage to the old jail and changes within PER itself have proved too much for the El Reno nonprofit, Johnson said. Like the building they are trying to save, PER members are growing older and membership numbers have plummeted in recent years; normal funding channels also proved fruitless so far. 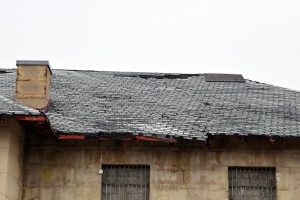 Extensive damage to Canadian County’s historic jail, built in 1907, is visible in a photo taken last week. Commissioners are teaming with Preservation El Reno and others to try to save the building before it is past the point of saving. (Photo by Traci Chapman)

“We just haven’t had the luck with grants and the like we normally would be able to obtain – and with losing so many of our members, it’s just been too much,” Johnson told commissioners during a special Oct. 21 evening meeting held in Okarche. “We needed to come back to you to see what you could do to help before it’s too late.”

The biggest immediate challenge at this time is the old jail’s roof, Anderson and District 3 Commissioner Jack Stewart said. After decades of neglect and the ravages of time and weather, the roof not only has its own issues, it’s causing more damage to the building interior. Animals and other issues only compound the issues, they said.

“It’s in bad, bad shape,” Stewart said. “It’s going to be a really big challenge to try to get it back into a place where we can have it stabilized, let alone think about any renovation or restoration efforts.”

That led officials during that October commissioners meeting to agree to a request by Johnson to vacate the 99-year PER lease – at least temporarily – so commissioners could evaluate and develop a plan to address immediate roof issues; Anderson said taking that step was necessary because he did not believe utilizing county funds to do any work while a nonprofit technically held title to the building was an appropriate use of tax dollars.

“We agree – we just want to address this now before it’s too late,” Johnson said. “We’re still more than willing to help with the building in any way we can and will continue to look for grant funding and other ways to help with preservation, but this situation is just too dire and too far beyond our capabilities at this point.”

Commissioners are now brainstorming individually how to move forward, Stewart said Monday. Although the board has not yet taken formal action on the matter, the commissioner said he believed it would come back before them for consideration quickly, especially as more extreme winter temperatures are just around the corner.

“While we aren’t able to talk about these things with each other outside of formal meetings (due to Oklahoma Open Meetings Act requirements), we know after speaking with Betty during the Okarche meeting – and in speaking to her individually since then – that all of us are committed to saving this building,” Stewart said. “We’ll continue to work together to hopefully be able to do just that.”