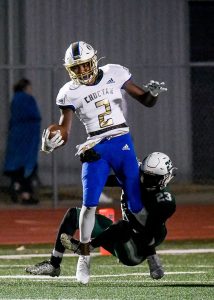 Jordan Mukes grabs an interception to help put Choctaw up on Muskogee early in the first quarter.
(Photo by Lindsay Tesio)

Choctaw High School claimed a historic win Friday night.
Choctaw gave the Roughers their third consecutive first-round playoff exit, while the Yellowjackets, in their first playoff appearance since 2015, claimed their first postseason win since 1981.
The Class 6A-II State Quarterfinal victory advanced the Jackets to the state semifinals for the first time since 1965.
Choctaw entered the playoffs finishing No. 3 in District 6A-II-I just behind their only division losses, Stillwater and Del City. All three advanced to the second round, while only top-seeded Bixby advanced from the other side of the state with a win over 6A-II-I’s No.4 seeded Midwest City.
Choctaw’s offense came out as explosive as ever Friday night, while the defense hit hard and fast making big stops just like in the previous games that helped push Choctaw to a five-game win streak.
Choctaw immediately stunned Muskogee with a flea-flicker for 58 yards and six points on just their third play of the game. Chase Jackson put Choctaw up 6-0 with 7:43 left in the first quarter.
Choctaw’s offense would keep Muskogee several steps behind all night, and the Jacket defense wouldn’t give the Roughers an opportunity for much.
Jordan Mukes snagged an interception, and then Choctaw went 87 yards in 14 plays, Deysean Moore rushed the final four yards and a pass to Jackson for the two-point conversion made it 14-0.
The Yellowjackets rolled to a 22-6 lead by halftime.
In the third, Muskogee was passing on third-and-7 from their own 22-yard line when Choctaw made the second crucial pick of the night.
An interception by Angel Ackerman would setup Moore for an easy one-play drive that put Choctaw up 29-6 with just eight minutes left in the third quarter.
However, that would be Choctaw’s only score of the second half as the Rougher offense would come alive, but Choctaw’s defense would continue to hold down Muskogee.
“When we played Deer Creek they were beating me on the out route quite a bit. After this week of getting some work in and just repetition it paid off,” said Ackerman, who made the interception that set up Choctaw’s only score of the second half. “We fought hard. We came in here underdogs. They said we were just a little bit better than Bartlesville, but we didn’t think that at all. We knew what we had to do, and came in here and handled business.”
Choctaw’s defense repeatedly killed Muskogee’s drives, and then Choctaw looked to score again.
Choctaw was up 29-6, but Muskogee would fire back making it a 29-21 game with just over nine minutes left in the game.
Muskogee had two chances to make it a one-possession game. The first was a three-and-out that gave the ball back with 4:52 to go. With 3:48 to play they had another chance, but on a fourth-and-1 from their own 34-yard line the Roughers went for a pass. Muskogee quarterback  Ty Williams found Kaunor Ashley near their own sideline, but the Jackets stopped him for a loss of three and a turnover on downs.
The CHS offense rolled down to the 17-yard line, but as the clock approached the minute mark, the Jackets prepared for victory formation and captured the playoff win, 29-21. 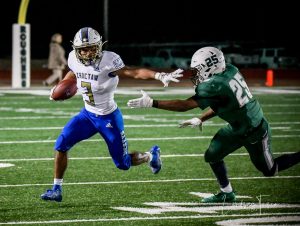 “It went just as planned. We wanted to win by one point, but preferably more. We won by eight, and we’ll take it,” said CHS head coach Jake Corbin. “This was a huge win for us, and our defense really saved the day for us in this game. Our defensive staff did such a great job of closing this out, and our players are just so resilient they just continued to make plays. We had two big fourth down stops there at the end to seal the deal. Our offense has gotten a lot of the credit this year, and our defense has come through here in the playoffs and the last couple weeks when we needed them. Defense kept coming up big, and I’m really proud of our kids. Super proud of our effort. “
Defense may have come through late to save the win, but Choctaw was put ahead early by an explosive offense that had Muskogee stunned and struggling all night.
Choctaw put in 436 total yards of offense on the night. 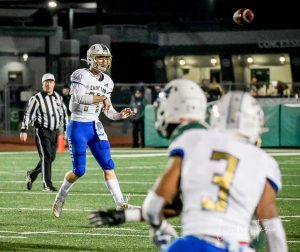 Quarterback Thad Williams threw for 236 yards, two TDs and a pair of 2-point plays. The senior QB rushed for another 61 yards. Moore rushed for 122 yards and two TDs.
CJ Smith had 15 yards rushing and Gabe Johnson had two. Johnson had 119 receiving including a TD, while Jackson had 84 yards and a TD of his own in addition to two 2-point catches. RJ Jackson had 25 yards receiving, while Cade Sanford and Moore each had four.
“I couldn’t be more proud of our guys and of our coaching staff. They’re all doing a  great job, and we’re making history each and every week. I’m just so proud of our fans, coaches, kids, players and everyone is just doing such a great job,” said an ecstatic Corbin. “I wasn’t born the last time Choctaw was here, and I’ll take it. We’re going to continue to try to keep doing some rare stuff. A lot of firsts this season. We rattled off five in a row, and I think we’re playing at a really high level right now. We have a rematch coming up, but we’ll worry about that tomorrow. Tonight we’re enjoying this win. I’m just so proud of our kids. No one thought that we’d be sitting in the last four standing. We were the only ones that thought that, and it feels great.”
Both teams walked away with an 8-3 overall record Friday. Muskogee was done for the year, while Choctaw claimed its first playoff win since 1981 and advanced to a rematch Stillwater in the semifinals.
Choctaw seems to have flipped a switch after that first meeting with the Pioneers. CHS is now on a five-game win streak following that stumble in Stillwater.
“We wanted this rematch bad. After what happened last time we were a little embarrassed. We went into that game, and no one believed we had a chance except for us,” said Ackerman. “That feeling of disappointment hurt us. We’re ready now. We’re hot and we want it.”
The Jackets will have a chance for redemption at a neutral site Friday.
The top three in Choctaw’s district improved to take a spot in the state’s top four. In the 6A-II quarterfinals, the east side’s No.1 Bixby eliminated Midwest City 42-10, No. 1 Stillwater blasted Sapulpa 77-6, No. 2 Del City dominated Booker T. Washington 33-7 and No. 3 Choctaw topped Muskogee 29-21.
Both semifinals are at  7 p.m. Friday. No. 1 Bixby (11-0) plays No. 3 Del City (9-2) at Putnam City High School and No. 2 Stillwater (11-0) faces  No. 6 Choctaw (8-3) at Yukon. 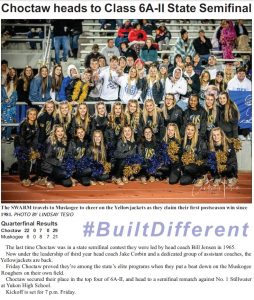