The racks are for sale, the inventory is marked down, and Mustang Stage store is preparing to close its doors – but not for long, officials say.

That’s because while Stage will soon be a thing of the past in the city, the company that owns the retail chain – Specialty Retailers Inc. – has confirmed to Mustang officials the state Highway 152 and Mustang Road location instead is slated to house one of its off-priced Gordmans retailers. 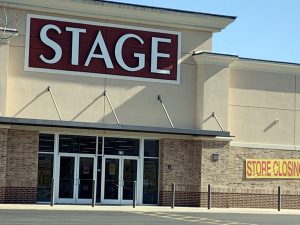 Mustang Stage store is in its final weeks in its current location, company officials confirmed last week. The retailer, however, also confirmed it planned to convert the space to a Gordmans. (Photo by Traci Chapman)

It’s a move being seen across the country, SRI officials confirmed Friday, after an almost three year process that began with SRI acquired Gordmans in 2017. Shortly thereafter, company officials said they began testing the waters two-year study that included a possible strategy of converting department store locations like Stage to Gordmans locations in smaller markets; in March, company officials announced Stage would convert about 80 stores to the off-price market, while closing as many as 60 other locations.

“We’re excited to accelerate our off-price conversion strategy,” Stage Stores president and CEO Michael Glazer said in a March release. “For the last few years, the off-price sector has seen tremendous growth despite the challenges that have faced traditional retailers.”

As part of its 2017 acquisition of Gordmans, Stage took over 48 locations, as well as a distribution center, officials said. The Mustang location is part of a larger plan that as of mid-2020 is expected to result in 300 Gordmans across the country.

It costs about $125,000 to convert a location from Stage to Gordmans, officials said. Representatives did not wish to make any estimate about how long it would take to complete that conversion and open the new off-price retailer as of press time.