The Mustang Broncos football magical season came to an end Friday night as the Jenks Trojans defeated the Broncos 55-28 at Bronco Stadium. The loss eliminates Mustang from the 6A playoffs, and pulls the curtain down on

Head Coach Lee Blankenship’s first season as the Broncos’ skipper. Mustang far exceeded the expectations put on them at the first of the season, getting wins over Tulsa Union, Edmond Santa Fe, and rival Yukon. The team finishes the season with a 7-4 record overall, and a 5-2 record in district play. 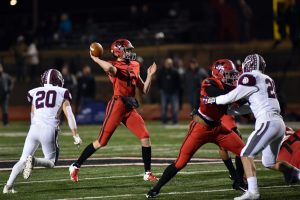 Hayden Conrad throws to a receiver against Jenks. (Photo by Alan Chapman)

Jenks is a perennial 6A powerhouse who lost four games early in the season due to an injury to star quarterback Michael Kittleman. The QB was firing on all cylinders on Friday night, throwing for 262 yards and five touchdowns as the Broncos fell into a 21-0 halftime deficit and were never able to recover from the Jenks scoring onslaught.

Mustang scored all 0f their 28 points in the second half as senior QB Hayden Conrad passed for 345 yards and three scores in his final game as a Bronco. The Broncos rolled up a respectable 441 yards of total offense, but it was too little, too late in the losing cause.

Trojans running back Will Cox scored all three TD’s for Jenks in the first half, on a 2-yard run and passes of 28 and 47 yards by Kittleman, bringing the score to 21-0 at halftime.

Mustang struck quickly in the third quarter on an 82-yard bomb from Conrad to Tristan Plumlee only 40 seconds into the quarter. Jenks answered a minute and a half later on a 40-yard run by Cox, who finished with four TD’s on the night. Jenks ended up scoring 34 points in the third, putting the game out of reach 55-14 by the end of the frame. Broncos’ running back Devyn Martin scored the second Mustang touchdown in the third on a 6-yard run. 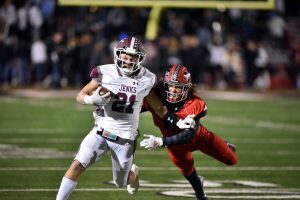 Mustang senior Liam Krivanek (11) tries to wrap up Jenks running back Will Cox (21) Friday night during a Class 6A-I state playoff football game at Bronco Stadium. Jenks used a big third quarter to roll to 55-28 win in the first round. (Photo by Alan Chapman)

The Broncos never gave up, and outscored Jenks 14-0 in the final quarter on a 39-yard pass from Conrad to Jordan McFadden, a two point conversion by Khary Brown, and a 55-yard TD reception by Brown.

Blankenship was especially proud of how his troops never stopped attacking, even when the score got out of control.

“The way that we finished the game is just what we believe in and have preached all season,” said Blankenship. “We are going to focus on what we can control. Attitude and Effort. We will never give up or quit no matter what the scoreboard says. Our kids played hard the whole game.”

Blankenship had a shout out to his senior QB Conrad for his effort. “Hayden Conrad had a huge night throwing the ball,” said the coach. “I think he had 345 yards passing.”

Blankenship’s message to the team after such a productive season is the same message that he has been preaching all year.

“My message was this – winning a game doesn’t define who we are and losing one doesn’t either,” Blankenship said. “Our character defines us. I told our seniors that I believe them to be a great class, but will wait to decide on that for a few years. I want to see what kind of husbands, dads, and church and community leaders they become. When we see that, we will determine how good of a group they were.”