Last December, the Board of Education of Choctaw-Nicoma Park Public Schools accepted a proposal to remove and replace most incandescent and fluorescent lighting throughout the district with new LED lighting. 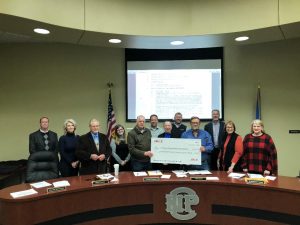 Oklahoma Gas and Electric Company presents a check to the CNP School Board for contracting Oklahoma LED to upgrade nearly every bulb in the district to LED. (Photo by Ryan Horton)

“Everywhere there was a lightbulb in this district we swapped it with an LED. This was an expensive endeavor, but it makes a tremendous difference in the classroom and everywhere else,” said CNP Schools superintendent Dr. Jim McCharen. “In addition, we get a rebate and the regular savings that LED provides.” 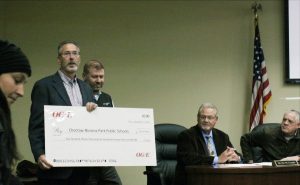 This massive project required the replacement or upgrade of more than 13,000 light fixtures throughout the district in all school buildings and gymnasiums.
The district contracted with Oklahoma LED, a company who specializes in large LED lighting projects, to perform the upgrade.
To date, this is the largest school lighting project they have done in Oklahoma.
The initial cost of the lighting project was $795,966, funded through a lease -purchase agreement with BancFirst.
Oklahoma Gas and Electric Company would also provide  a rebate to the school district for a portion of the cost of the project.
This rebate, presented to the school board Nov. 11, amounted to $211,671.
Energy analysis provided by Oklahoma LED and OG&E has projected the energy savings of the LED lighting, combined with the rebate, will pay for the entire cost of the project in a little over six years.

In addition, each LED replacement lighting element comes with a 10-year warranty.  The lighting project is expected to be completed by the end of the year.