In July Choctaw city officials voted unanimously to amend the code of ordinances, prohibiting the spreading of solid human waste within city limits.
Now officials have modified the law, still prohibiting sludge, but allowing for the use of a more refined Class A biosolid fertilizer.
As passed earlier this year, the city ordinance, declared the spreading of solid waste, from a wastewater treatment plant, a prohibited nuisance.
Personal compost and aerobic septic systems were not affected, but Choctaw residents were prohibited from using solid human waste, provided by treatment plants of other cities, as fertilizer. 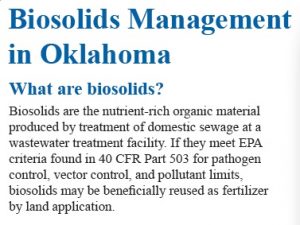 The initial ordinance was drafted following public complaints about the smell and flies around areas of application.
Officials say, everything that goes down Oklahoma City sewer pipes arrives at a wastewater treatment plant. It’s swirled, settled and separated, then the cleaned water is discharged leaving behind sludge. For several decades that material has been spread on agricultural property and bottom land around the North Canadian River throughout eastern Oklahoma County.
The use of biosolids reduces a farmer’s production costs and replenishes the ground’s organic matter. The free Class B sludge spreading service increases the soil quality for farmland, and will continue on land outside the Choctaw city limits.
Since the approval of the ordinance, citizens operating farm land within the city limits have spoken up to city officials with concerns the new ordinance will directly affect their livelihood. 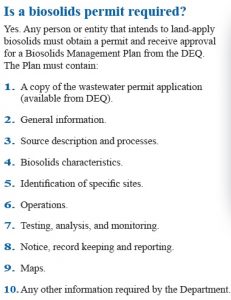 And following an educational visit from the Oklahoma Department of Environmental Quality, city officials decided to amend the ordinance to allow for Grade A biosolids, while Grade B sludge remains classified as a nuisance by the city.
Grade A biosolids are dried and heated sewage sludge that meets U.S. EPA guidelines for land application with no restrictions. DEQ officials say the drying and heating process causes Grade A biosolids to lose most of the off-putting characteristics of Class B biosolids.
However, local farmers feel the ordinance change is not enough as free Class B sludge spreading is crucial to managing their agricultural-zoned land.
“I’m still concerned about the ordinance that prohibits us from spreading sludge. I’m still of the opinion that my rights have been violated,” said a local farmer in attendance for the meeting. “The council says you can’t use a certain type of fertilizer that’s approved by the federal government, the state government, the water resource board, OERB and everybody else. The fact that we can’t have that applied for free has really impacted our farm operation on the land that we have run since before statehood. I would appreciate it if we could look at that again.”
Also, agricultural land owners say their neighbors complaining about smells and insects, common in the country, will still be effected by nearby farms that are not within the city limits and therefore not subject to the ordinance.
Despite the protest from a landowner in northeast Choctaw, the ordinance change went to a vote.
Ordinance No. 904-2019 was modified to allow the spreading of Class A biosolids. Class B solid waste from waste water treatment plants remains a nuisance as established by the original passage of the ordinance in July. The motion was passed and approved with an emergency clause by the Choctaw City Council, Nov. 19.
Ward 1 City Councilman Chad Williams was the lone vote against the ordinance change and emergency clause. 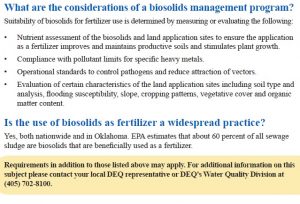