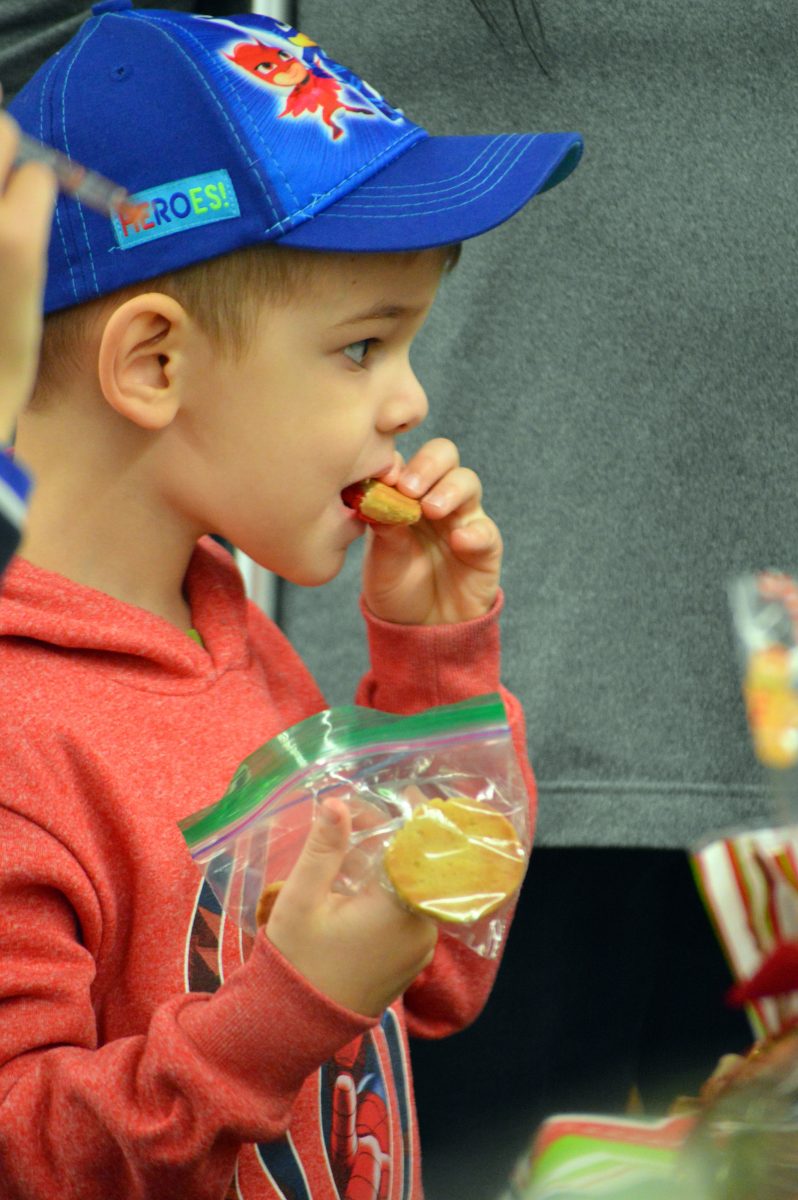 Saturday’s Honey Festival will feature a number of attractions, from tours of the local honey plant, cotton gin, and wind farm, to the annual honey bake-off, chance to meet Santa, carriage rides, and much more. 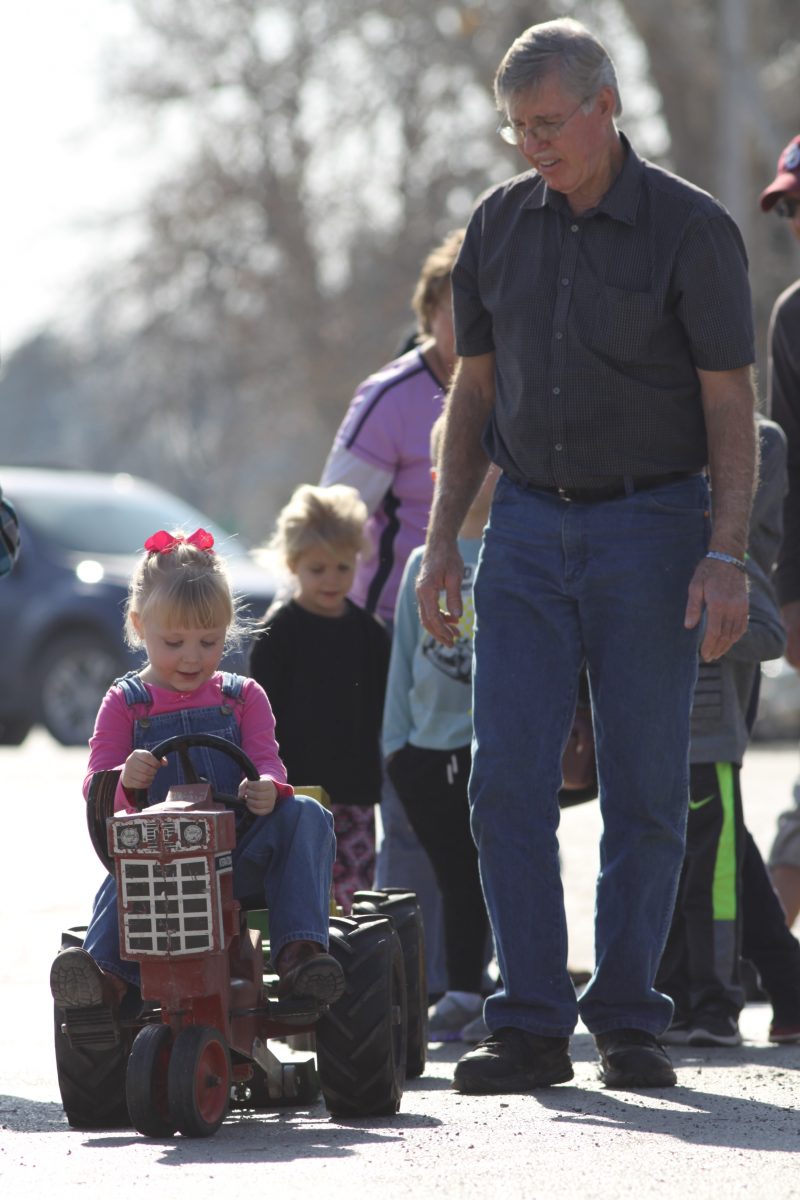 We actually have had two of our own Minco students who have gone to the national level and one of them won a couple of years ago. It’s really a fun way to spend an afternoon here, as well as letting them see how strong they are by pulling these weights on the tractor. The chamber picks up all the cost on that so it is something we offer free.”
Register at 11 a.m. near city hall, and the contest will begin at 12:30 p.m.

HONEY BAKE-OFF
The honey bake-off has some simple rules that must be adhered to if a contestant hopes to win the long-standing Honey Festival tradition.
The contest will take place at the Minco Senior Center, located at 221 Northwest Main St. in Minco.
Beth Madden is a coordinator for the bake-off.
“Everything needs to be in by 11 am,” Madden said. “They’re going to judge at noon. An entry must include a written recipe. It must have honey in it. There are two entries allowed per contestant. It must also be a baked good.” 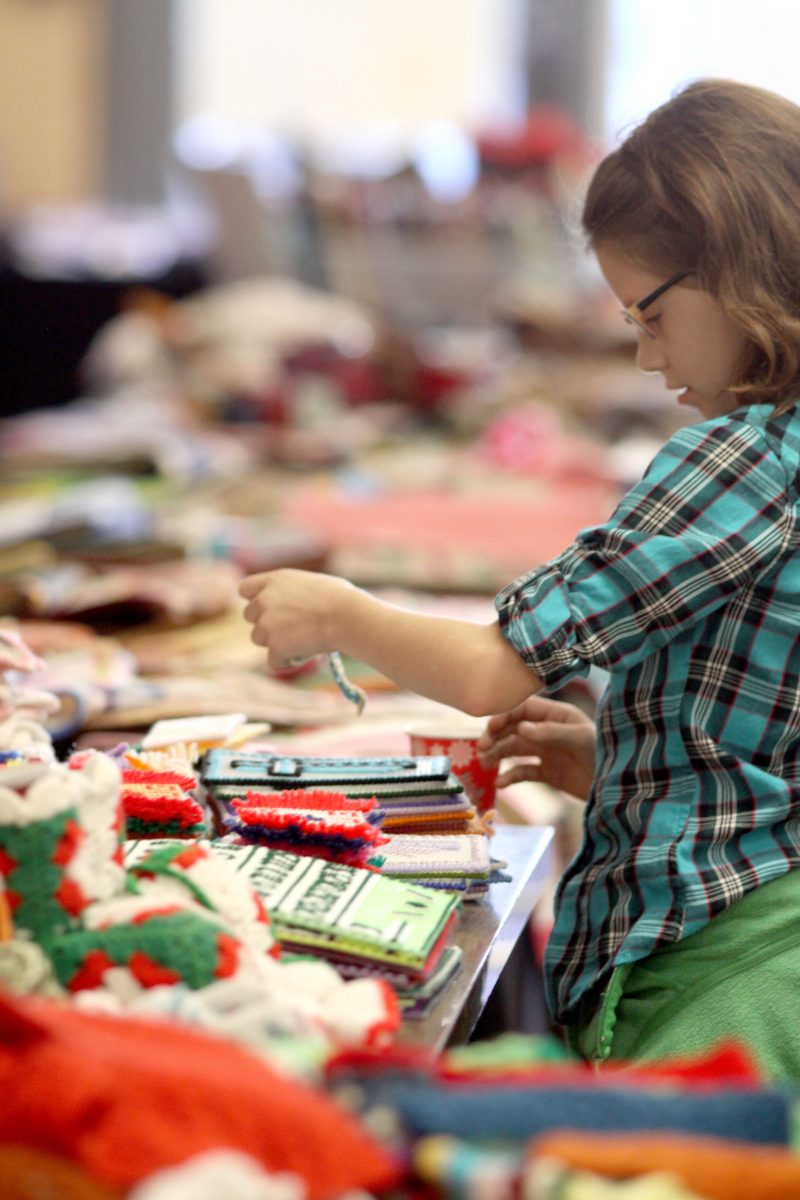 Three anonymous judges will decide who the bet ter bakers are. The contest is not the only attraction at the center though.
“We’re also going to be open at the Senior Citizens Center,” she said. “We’re going to have food to sell here also. The Senior Center itself will be raffling off a $100 gift card for Walmart.
“The honey bake-off has been a part of the Honey Festival since the very first one,” the chamber official said.

OPENING EVENT
The Honey Festival will be held throughout the Town of Minco Saturday, Dec. 7, beginning at 7 am with the Shawnee Mills Pancakes & Sausage Breakfast at First United Methodist Church.
The kickoff event will be hosted by the Minco Chamber of Commerce and sponsored by First National Bank.
Most attractions will begin at 9 AM. The Minco Chamber of Commerce announced the date recently, and a program of events can be picked up around Minco, at businesses including the Blossom Time Shops. 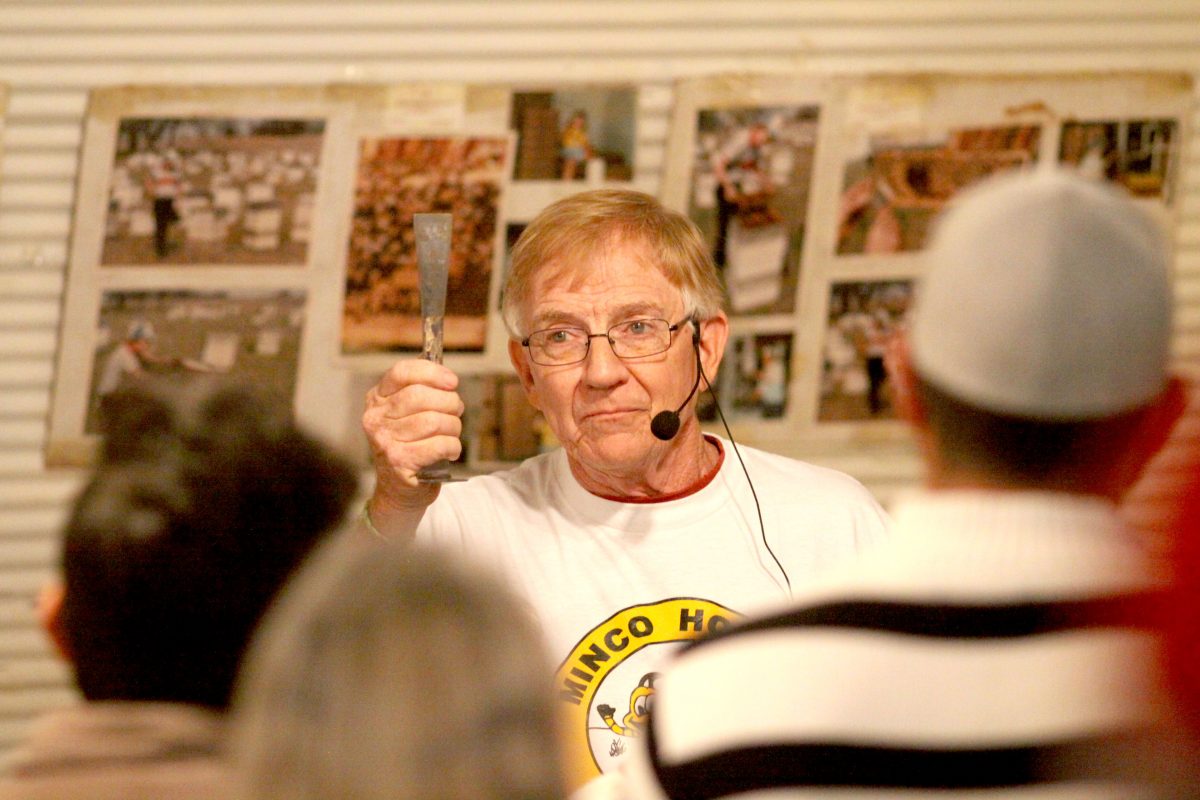 Many of the traditional honey festival events will continue this year. The Ross Honey Company will hold tours from 9 am to 4 pm at 109 Belle Street, one block north, and then one block east, of Main Street.
Owned and operated by Jimmy and Glenda Ross, the Ross Honey Company is Oklahoma’s largest honey plant.
Great Plains Cotton Gin, located 1.25 miles east on Highway 37, will host tours hourly from 9 am to 4 pm. Wind tower tours will also be available from 10 am to 3 pm, courtesy of Nextera Energy. Shuttle transportation will be provided at City Hall.

Jimmy Ross is the owner/operator of Ross Honey Co, the plant that led to the name of Minco’s premier festival. The Honey Festival will be held throughout the Town of Minco Saturday, Dec. 7, beginning at 7 am with the Shawnee Mills Pancakes & Sausage Breakfast at First United Methodist Church.
The kickoff event will be hosted by the Minco Chamber of Commerce and sponsored by First National Bank. Other attractions such as Santa Clause, the Little Miss Honey Bee Pageant, kid’s tractor pull, honey bake-off, and more will add to the festivity.
Ross spoke Friday about the history of the Honey Festival.
“This is our 29th year doing it and the chamber just kind of came up with the idea of using my unique business to draw a crowd into Minco,” Ross said. “It’s really been a very effective tool to bring a lot of revenue into our town this time of the year. The honey plant is just part of it, though.
“They’ll tour the cotton gin, the wind turbines, there will be live entertainment, and over 100 vendors at the high school selling their wares, so it’s a lot more than me. For my part, we give tours beginning at 9 o’clock in the morning through 4 pm on how we process and market honey.”
After making a living for decades in the honey business, Ross now holds annual tours at the plant, located at 118 Northwest Belle Street in Minco, during the Honey Festival.
“I used to have 1,500 hives of bees, but I don’t work out in the bee yards anymore,” Ross explained. “I buy honey from guys who have my old bees, and other guys that I know, so we still bring in honey and we bottle it at Minco and everything.
“The plant is still set up from when we were extracting and producing about a couple hundred barrels of honey a year. We just tell the bee’s story in our talk and the value of the honey bee, pollination, and all that. We’ll go over the bee hive and show you what it consists of, and then we’ll talk about what it takes to produce honey.
“Then, we’ll talk about how you handle the volume of 100,000 pound crop. We have machines to do the end-capping and the extracting and then, finally, the bottling. It’s really an educational tour for anybody and it’s fascinating because the bee’s story is so unique. The plant dates back to 1946 and some of the machinery, that still functions, dates back to 1917. It’s really fascinating.”
Hundreds of different honey gift baskets of various sizes will be available at the honey plant during the tour. Honey straws, hard candy made of honey, and honey bottles of all sizes are among some of the honey-infused goods that will be available. 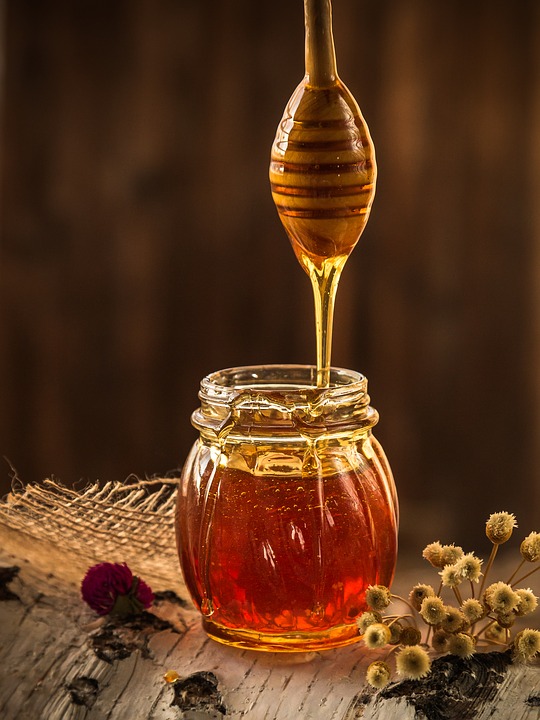 Ross said, “We sell an awful lot of honey that day. Everyone that comes to town for the festival seems to go home with a bottle of honey, anywhere from a 12-ounce honey bear to gallon containers.”
Ross detailed the tour, but to really grasp the bee’s journey, you have to make a trip to the Honey Festival Saturday, Dec. 7.
“The front part of the building is for the people coming in,” Ross said. “We’ll have a bee hive, and we’ll go through it, and show how each bee hive works. And then we’ll have colored pictures of the bees and all the works that they do, and what it takes to produce honey and pollinating crops. After we go through that, then I go and explain the machinery used for volumes of honey.
“Then, we store honey in 55-gallon barrels, and we have to use a forklift to pick it up, because it’s so heavy, to take it into a hot room to liquefy the honey. It goes through the filtration process, then we’ll go to another section of the building where I’ll show an actual video of me working up in the bee yards and show how we bring the honey in.
“It’s kind of an extra ordinary viewing of the process from the beginning to the end. What’s cool is, so many people after they have taken this tour and heard the story about the bees, they tell me how they’ve got bee hives in their backyards, just because they came in and toured my facility. That’s what’s cool about it is other people will have an interest in getting into beekeeping.”
Beekeeping took a big hit due to a chemically-induced colony collapse many years ago, but the honey bees are making a comeback, Ross said.
“Well, we pinpointed the problem down to specific chemicals. It was called a colony collapse disorder. We knew about it for several years. It’s just a matter of getting a relief from the chemical companies, and what they’re producing. As far as I know, we probably have half the commercial beekeepers in the country now that we had 40 years ago when I was prime in this business. We ran, I can’t remember, about 5,000,000 hives of bees back in those days in the country, and now it’s probably half of that.
It’s just been very hard to compete with cheap foreign honey that comes into the market and stuff like that, and bees have gotten very expensive, because it’s so hard to keep them alive.”
Ross is obviously a huge fan of honey, but won’t sell you on any honey myths. The rumor that eating local, raw honey will improve your response to allergens may be only that, a rumor. There are still plenty of reasons to check out this perfect food.
“The idea is that if you’re allergic to the pollens in your area, you eat this raw honey, then you’re eating some of the pollens, and you build up a resistance. I don’t know how local it has to be. There’s not much difference in a cedar tree from Oklahoma and a cedar tree from Kansas. I don’t know how much validity there is to it. I’ve been eating this raw honey for a hundred years and I still have allergy problems. It’s a natural sweetener, so it’s better than processed sugars and all that. It’s the only perfect food in the world. It never spoils. They found honey in the pyramids that was edible. It’s good forever.”

THE FOOD
There will be many places to eat in Minco during the festival, including the Donut Shop, Eastern Star, Gas-N-Go, Mac’s Corner, Nachito’s, Sid’s Diner, and much more.
Other businesses that will be open during the festival will include Blossom Time Shops, Harris Hardware, Minco Auto, Minco History Center, Petals and Pinecones, and Sister Act 3. 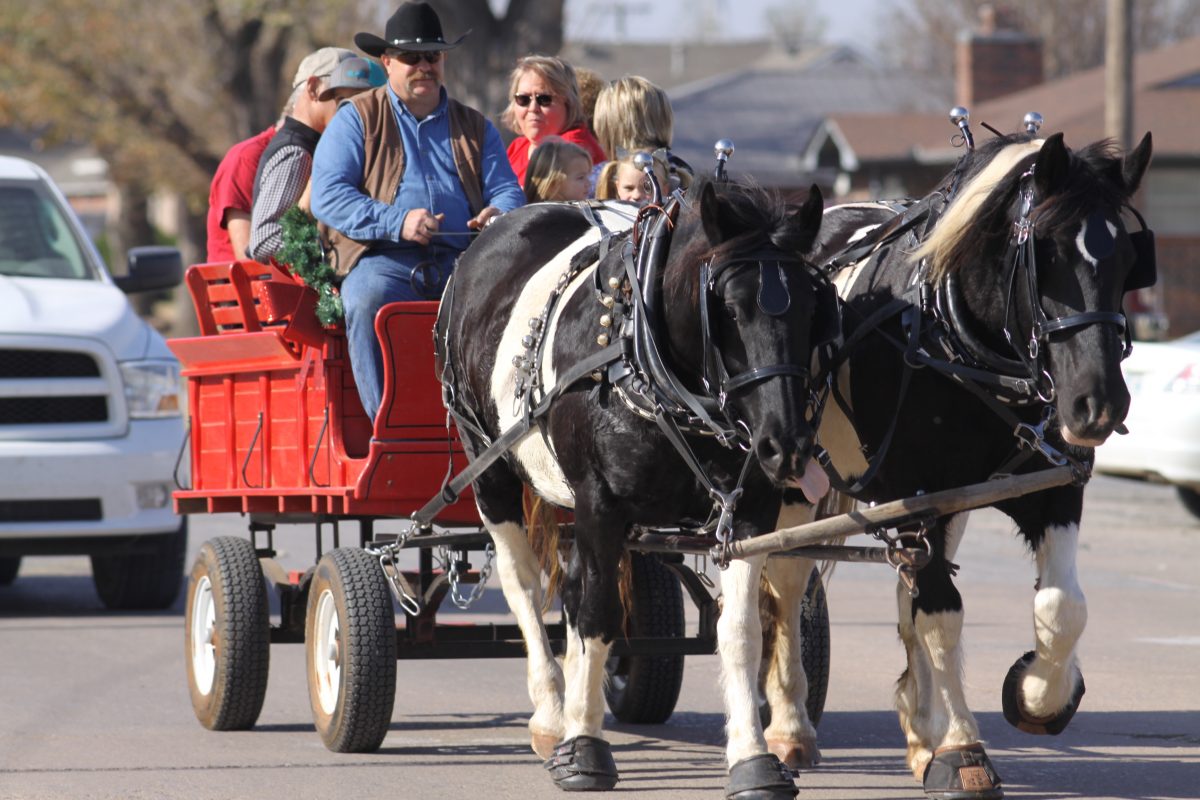 An arts and craft show will feature over 100 vendors from 9 am to 4 pm at Minco High School, located at 311 SW 6th street. The arts and craft show will feature individual crafts, jewelry, gifts, honey baskets, wood and iron crafts. For more information on arts and craft show, call 405-352-0518.
Carriage rides throughout Minco will be provided by Thompson Carriages from 10am to 2 pm at Veterans Park downtown. The carriage rides will cost five dollars per person, but patrons five and under can ride free.
Emmy award-winning Minco native Lucas Ross has appeared in feature films, national television shows and hundreds of regional commercials. Lucas can be seen weekday mornings on Freedom 43‘s “Rise and Shine.”
When he’s not on TV, he’s playing the banjo and has released three bluegrass comedy albums entitled “Son of a Beekeeper,” “Banjo Farm,” and the newly released “Banjos in Space.”
The Little Miss Honeybee Pageant will be held the morning of December 7. Contestants must be in first,
second, or third grade, and must be a Minco resident.
The pageant will be held at first Baptist Church at 10:30 am. For more information, contact Shelby Morgan at 405-535-8001.