Choctaw High School opened basketball season last Tuesday hosting Lawton.
Before the varsity contests got underway Choctaw performed well in the junior varsity matchups.
Both junior varsity squads claimed big wins leading up to varsity contests.
The JV Lady Yellowjackets didn’t allow Lawton to find the hoop until late in the fourth. CHS took that win 62-5.
Choctaw’s junior varsity girls totally throttled Lawton at opening night.
The Lady Jackets scored 62 points, while only giving up two buckets late in the game.
Lawton made two shots good for five points, and those came late in the final quarter of play.
On the CHS side there was plenty of scoring to be distributed throughout the lineup.
Freshman Taya Addington led the JV with 10 points, while Daezi Hernandez and Mya Purifoy each had nine. Jasmine Adams has eight, Preslee Irwin scores seven, Savannah Slayton had five and Kristen Moore had two.
“A lot of people scored points. Lawton didn’t score until the fourth so that’s pretty solid defense,” said junior varsity coach Brian Spradlin. “We had seven or eight freshmen in there, and a few from other grades in there playing well.”
The future of Choctaw basketball looks as bright as ever.
“We’re blessed with a lot of talented girls. That’s what we always say, because there are really a lot of talented girls that come through here,” said Spradlin.
Choctaw’s JV Jackets secured a 51-44 victory over the visiting Wolverines.
Led by coach Terence Carter the junior varsity boys proved physical and accurate rolling to the 7-point victory.
Robert Gambill led the JV Jackets with 16 points, while Jeremy Greer-Taylor had 14.
Nathan Rodgers had eight, Elijah Wilder scored six, Larry Ruffin put up three, while Reed Dequasie and Bolton Hawkins each had two points.
Lawton would avoid a total sweep by splitting in the varsity games. In the varsity girls’ game Choctaw dominated Lawton, 84-26. In the boys’ varsity game Choctaw and Lawton went back-and-forth all night before Lawton was finally able to take a lead in the third period. Lawton was able to maintain a small lead and capture the win in the final minute of play, 69-62. 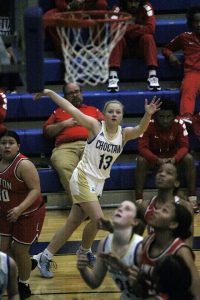 Choctaw senior Kristin Farris comes off the bench to drop a big 3-pointer on Lawton. (Photo by Ryan Horton)

By halftime Mackenzie Crusoe was leading Choctaw with 19 points, and she was able to relax in the second half as the entire lineup got some court time.
Scoring was diverse as every member of the CHS lineup, except for one, managed to score on the visiting Wolverines.
Trinity Gooden finished the night with 12, Kristin Farris had 10, Mya Purifoy had eight and Carley Gasaway had seven.
Hannah Smith and Jali Seagraves each scored six, Nikki Banks scored five, Daezi Hernandez scored four.
Preslee Irwin, Avery Clark and Jasmine Adams each had a bucket, while Taya Addington made one from the line.
Head coach Ryan Maloney was happy with the dominant win to open the 2019-20 regular season.
“This was a team that lost a couple, and we figured we’d be the better team but I’m proud of what we did. We got out early and had a great first quarter. Our starters did what they needed to do and we got some experience for our younger kids. We really need that, because we’re playing five more tough games before Christmas break,” said Maloney.
Choctaw showed they’ll once again have some seniors making big plays this year, while a solid group of underclassmen will be looking to make names for themselves in Class 6A.
“It was a good night for our seniors,” said Maloney. “Crusoe had a great first half. She shot really well, and Avery had a lot of those assists to her. Those two are going to be fun to watch this year. Kristen Farris came off the bench and had some threes for us. I’m real proud of her. And Seagraves had some good shots.”
Those are the team’s four seniors, while this year’s roster has three juniors, four sophomores and three freshmen.
Maloney says the preseason helped Choctaw prepare for what they hope will be another trip deep into the postseason.
“We played three or four of the tops teams in the state and really wanted to make it tough. We want to be battle tested, and we gained a lot of experience. We showed that tonight,” said Maloney. “We plan to be in the running for state every year. That’s what they want.”

Lawton claimed a varsity split, and avoided a total sweep last Tuesday when the Wolverines rallied late to overcome an aggressive varsity team of Yellowjackets.
In the boys’ varsity game Choctaw and Lawton went back-and-forth all night before Lawton was finally able to take a lead in the third period. Lawton was able to maintain a small lead and capture the win in the final minute of play, 69-62. 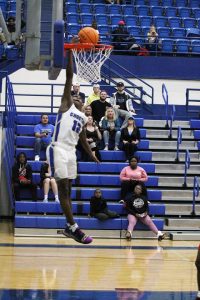 Louis Gurley goes up for an easy basket on Lawton. (Photo by Ryan Horton)

At halftime Louis Gurley was leading Choctaw with 12 points. Sean Franklin had eight, and Jordan Mukes had five as the team rolled to a 34-32 lead.
Gurley finished the night with 17 points. Sean Franklin had 15 and Jordan Mukes put up 11.
Eric Gooden had seven. Jaxson Burchett had five. Terrill Davis had four while Raul Nunez put in three.
Choctaw got in trouble with some fouls, shot selection and turnovers and the Wolverines took full advantage to claim the win late in the second half.
Choctaw’s coaches believe preventable errors caused the loss to the talented Lawton team, but they expect Choctaw to improve significantly in coming weeks.
“We missed 10 layups. That’s a 20-point difference. That’s a good team, and I think we’ll see them again down the line,” said head coach Jermaine Simpson.
“No one wins a championship in November or December. You get out in the first game and see what you need to fine tune. We have a couple guys getting out too fast, too early and just trying to do too much, too soon. It’s obvious we have the talent. If we handle the small things we put ourselves in position to win some games.”
Simpson says his squad was tested in the preseason and he expects his talented lineup to be heading toward the postseason.
“ We went and battled some of your better teams like Booker T., Norman North and Del City. We played some of the top teams in the state, because we wanted to challenge ourselves,” said Simpson. “We have some guys who are going to bring some different results this year. Moving forward we’ll work on some things, but we’ll be a team making a lot of noise toward the end of the season.”