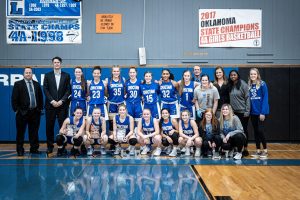 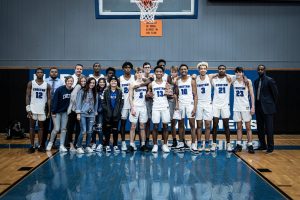 Both Choctaw High School basketball squads dominated their way to a Harrah Panther Classic Championship over the weekend.
After opening the year with two close losses, the CHS boys turned it around this weekend and captured three straight over ranked challengers.
CHS opened with a 91-52 romp over Class 3A’s No. 11 Kingston team.
Then the Yellowjackets put it on 3A’s No.3-ranked Star Spencer, 90-62.
To cap the weekend Choctaw added a third lopsided victory with a 74-47 throttling of Class 5A’s No. 7 El Reno.
Anthony Bowen was named Tournament MVP and LJ Gurley was an All-Tournament selection.
The No. 8-ranked Lady Yellowjackets extended their undefeated run to 5-0 in the Harrah tourney.
They beat hosting Harrah 75-36, and then Class 6A’s No. 17 Edmond Santa Fe, 58-39.
The Lady Jackets capped their romp through the tourney, and proved they may have been underrated, when they thrashed top-ranked Moore for the title, 49-38.
Mackenzie Crusoe was named All-Tournament MVP, while Avery Clark also earned All-Tournament honors.

The new-look Choctaw Yellowjackets completed a romp through the bracket of the annual Panther Classic at Harrah with a convincing 74-47 victory over El Reno in Saturday’s championship game in the Harrah gym.
It was the third straight romp by Jermaine Simpson’s club and tourney MVP Anthony Bowen and All-Tourney selection LJ Gurley led a balanced attack that saw Simpson clear his bench in all three games. 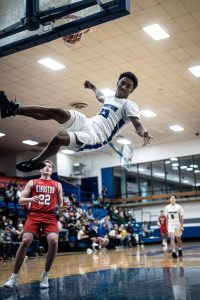 After putting in a dunk on Kingston, Choctaw’s Terrill Davis looks towards his landing. CHS beat Kingston, 91-52. (Photo by Jason Turner)

Bowen had three straight 3’s in the first quarter as Choctaw opened up a 19-6 advantage after just one quarter of play. Jordan Mukes added a trey and Gurley had a traditional three-pointer to go with field goals by Eric Gooden and Sean Franklin.
After El Reno had a mini-rally to close to within 34-21 at halftime, the Jackets applied the clamps in the third period, limiting the Indians to just  three points while Sean Franklin added 10 points and Gooden added 8 to the Jackets’ 26-point harvest to open up a 60-32 bulge. Reserves Robert Gambill and Gabe Warren got on the scorebook in the final frame of 14 points.
THE JACKETS wasted no time in wrapping up a berth in the championship against El Reno as 4A power Star-Spencer was easy pickings for Jermaine Simpson’s boys to the tune of 90-62 and it could have been worse.
Sean Franklin connected on a field goal and two free throws while Jordan Mukes and LJ Gurley had field goals for an 8-0 lead before the Bobcats ever dented the scoreboard.
Raul Nunez came off the bench and sparked the Jackets with two treys, two field goals and a free throw for an impressive 24-13 lead after one quarter of play. Nunez would finish with 15 points for his season high.
By halftime, the Jackets had jumped out to a 45-24 advantage and the question in the field house was, “Would the Jackets reach 100?” And they would certainly could have had not Simpson employed some strategic substituting.
Following a free throw by Nunez, Jaxson Burchett had a field goal and a free throw. Then Gurley and Terrill Davis combined for 7 points while Star was scoreless. Mukes added a free throw, Anthony Bowen had a three and a two sandwiched around a field goal by Gurley for the halftime bulge.
In addition to Gurley’s 24 and Nunez’ 15, Bowen had 14 and Davis 11 to round out the double-digit scoring. Mukes added 8 and Burchett had six.
CHOCTAW HAD three players in double figures and Coach Jermaine Simpson cleared his bench early as the Yellowjackets delivered a 79-30 whipping on small school power Kingston in first round action of the Panther Classic on Thursday.
The Jackets jumped out to a 10-2 lead and Sean Franklin’s trey at the buzzer gave Choctaw a 24-7 bulge after just one quarter of play.
Anthony Bowen sparked the early assault with a trey, a traditional three-point play and two field goals for 10 of his14 points in the first quarter. Terrill Davis connected on a jumper as time expired at halftime to put the Jackets on top, 38-20.
L. J. Gurley stepped forward in the second period with a pair of free throws and three field goals for 8 of his 18 points.
Football star Jordan Mukes got in early foul trouble and did not score in the first half, but made up for lost time after intermission with 20 points to lead the Yellowjackets in scoring.
Simpson started his exodus of starters when the margin soared over 30 in the third period.

The Choctaw Lady Jackets’ expected showdown with No. 1 ranked Moore failed to materialize Saturday in the finals of the Panther Classic in Harrah when Choctaw posted an impressive 49-38 triumph over the Lady Lions to win the championship.
The Jackets’ previous No. 8 ranking should take a huge leap after the dominant win at Harrah, which wasn’t as close as it appeared.
Ryan Maloney’s Ladies unleashed an impressive demonstration of shooting treys and took advantage of Moore’s outstanding D1 prospect Alliyah Moore’s foul troubles to post a 38-23 halftime advantage.
Soph Carley Gassaway had 3 treys in her 13 points, while Tournament MVP Mackenzie Crusoe also had 3 treys and 12 points. All-Tournament selection Avery Clark also had two and Kristin Farris added one in the second quarter surge.
Maloney took his foot off the pedal after intermission with Moore back on the court as each team added only 7 points in the third period and the Lady Lions couldn’t get the ball inside to the 6-3 Moore, who is being recruited by Tennessee.
In addition to Gassaway and Crusoe, Trinity Gooden, who did a superb job of policing Moore, added 7 points and Hannah Smith had 6 and Farris added 3.
CHOCTAW ROARED into the championship contest with an impressive 56-39 triumph over defending tourney champion Edmond Santa Fe on Friday. Ryan Maloney’s girls jumped out to an 11-0 lead as all five starters scored, beginning with a field goal by Mackenzie Crusoe, followed by a trey by Avery Clark, another trey by Carley Gassaway, a free throw by Trinity Gooden and a putback by Hannah Smith.
Santa Fe pulled to within five with 34 seconds left in the first half, but the Lady Jackets answered with a field goal by Smith and two free throws by Kristin Farris for a 27-18 lead at intermission. 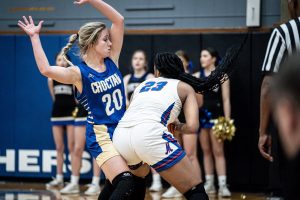 Mackenzie Crusoe gets physical with top-ranked Moore in the final of the Panther Classic. CHS took down No. 1 and remains undefeated at 5-0.
(Photo by Jason Turner)

The Jackets opened the second half with a jumper in the lane by Gooden followed by a bucket by Crusoe, a three by Clark and another basket from Smith for a 36-22 bulge before Crusoe took control of the game.
She had two field goals sandwiched around a trey to end the third period with the Jackets enjoying a 43-38 advantage.
But the senior sharpshooter wasn’t through with two more buckets, then a steal and layup to give her 24 points for the contest. Gassaway then dropped in a trey and following a baseline drive by Clark, connected again to wind up the scoring.
Clark finished with 17 points and Gassaway added 8 more while Gooden controlled the offense with her deft ball handling added to her defensive skills and rebounding to give the CHS girls a presence inside and out.
THE LADY JACKETS unleashed a barrage of  three-pointers to easily outdistance Harrah in the opening round of the Classic on Thursday, posting a 75-36 triumph over the host Lady Panthers.
Avery Clark had three treys and added 15 points to the scoring chart while Mackenzie Crusoe had a 3 among her 11 points. Reserves Kristin Farris and Jali Seagraves had the other three-pointers
With reserves seeing the majority of the action in the second half, the red-hot Jackets finished with 11 treys in the contest, five of them by Carley Gassaway who lead the scoring parade with 19 points in just over a half of action.
Hannah Smith added a pair of field goals early in the fourth quarter to finish with 8 points. Bailey Cornsilk, Nikki Banks, Preslee Irwin also scored points for the Lady Jackets.
The Lady Jackets took a 6-0 record into Tuesday’s home game against Putnam City North to wind up the 2019 portion of the season before facing a stern test when Midwest City visits on Jan. 7.