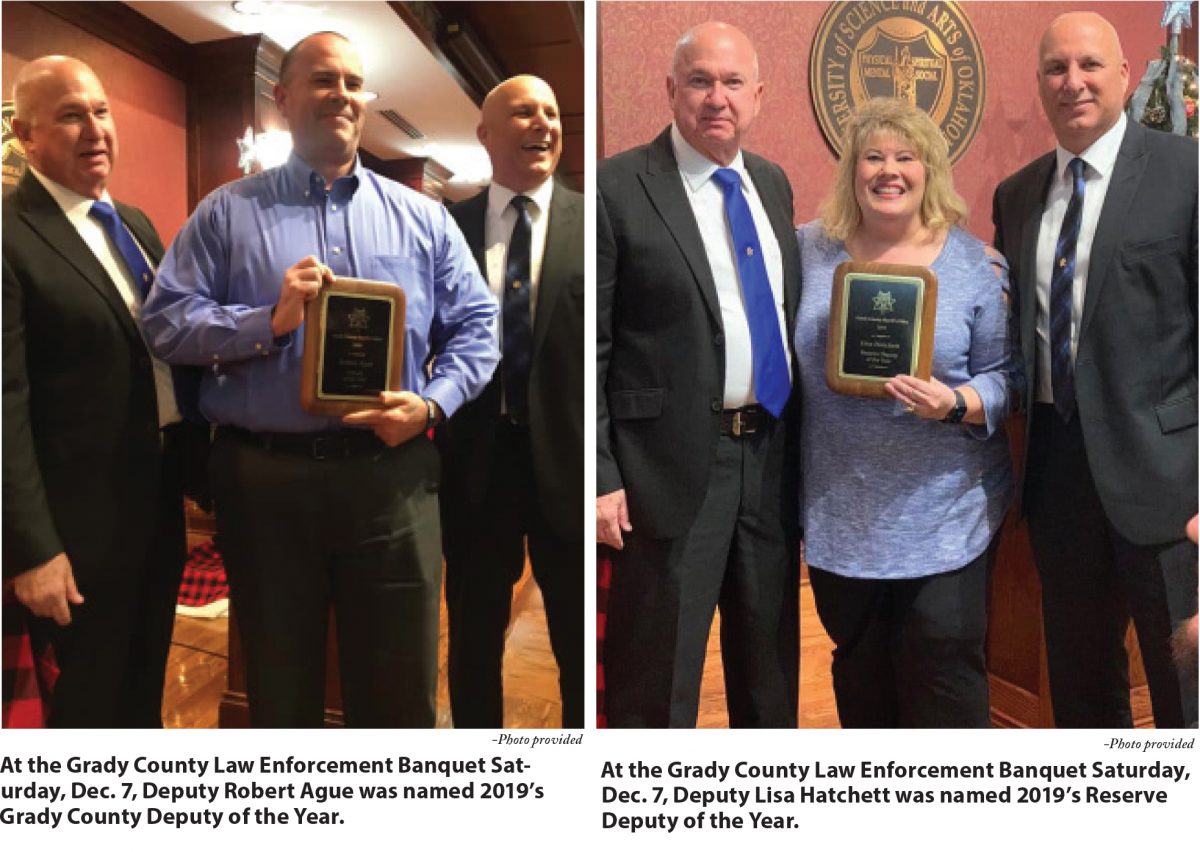 At the Grady County Law Enforcement Banquet Saturday night, Deputy Robert Ague was named 2019’s Grady County Deputy of the Year. Deputy Lisa Hatchett was named 2019’s Grady County Reserve Deputy of the Year. Joshua Huffines won Dispatcher of the Year, and Rex Brown earned Executive Deputy of the Year.
Mathew Elliott presented Sheriff Jim Weir and Undersheriff Phil Blevins with a framed Sheriff’s Office flag. This flag he had asked me to get for him before his last deployment. He took it to Kuwait and the photos at the bottom of the frame are of his unit, 1245 Transportation. 1st platoon BattleGoats.
The winners of the awards were voted on by their peers, Grady County Sheriff Jim Weir said Monday.
“Our awards are based on the input from the people they work with,” the sheriff said. “I don’t pick them. The undersheriff doesn’t pick them. We ask everyone to vote. We ask them to give their reason for their vote. We don’t want it to be a popularity contest. We want them to vote for somebody for a substantial reason, something that makes them stand out above the other deputies.”
The sheriff lauded Hatchett, who started at the Sheriff’s Office as a Public Relations Officer, but increased her own role.
“Ever since Lisa came on board with the sheriff’s office, her hat has grown bigger and bigger,” the sheriff said. “Every time we turn around, she’s taking on extra duties, administratively, even before she was a reserve deputy. She was handling all the sex offenders registration, keeping track of them and working with US marshals when we did the sweep a couple years ago to make sure those offenders were in compliance. She made sure that they were either arrested or they got in compliance.”
She’s also a hand clerically, the sheriff said. “She handles all the purchase orders. She assists me hand in hand with all the basic finances of the sheriff’s office. She keeps track of the bills and I keep track of the checkbook, so to speak.
“And then when she became a reserve deputy, she did not slow down at all. She took on the additional duties as a reserve deputy. They’re required to put in 16 hours of volunteer time a month as a deputy. She usually does that working special events or going out on patrol with other deputies.
“Those who voted for her pointed out everything that she does for the sheriff’s office and she does it, not just for the sheriff’s office as a whole, but any individual deputy who comes to her.
It’s the same thing with Deputy Ague.”
The sheriff continued on about Ague, who has also found a way to serve with distinction, even among Grady County’s finest.
“He’s a very knowledge deputy,” Weir said. “He’s got over 20 years of experience. And being a sheriff’s deputy, like any law enforcement, is really a team effort. Lots of times, you’re required to make split-second decisions out there in the field as a deputy. Sometimes, there’s a break and we have time to step back and think, ‘Okay, what do I need to do next?’ sometimes. You never learn it all and there’s always some little thing, but even with the most simple arrests, there could be some small detail that you’ve never seen before, and he’s one of those guys whose got the experience so a deputy might not have to call on their supervisor when they’ve got a question.
“The people who voted for him said he does it with a smile on his face, and never seems bothered. He’s always happy to help the volunteers, to help with many cases, but he doesn’t hesitate. He’s the kind of officer who’ll jump right up and do whatever he can do to help them to get the job done.”
Sheriff Weir also praised the rest of his deputies as well.
“Every year, it seems like somebody shines more than the others and every year, by majority vote, they seem to pick out the ones that were the most helpful. However, I’d just like to let the public know that every deputy we’ve got, full time and reserve, are of the highest caliber individuals this county has to offer and I’m very proud to serve with them.”