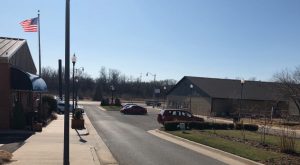 Main Street and NE 23rd are two examples of properly constructed roadways within the city limits. NE 23rd is SH 62 and controlled by the Oklahoma Department of Transportation, while most other roads have little to no base. City officials say most roads evolved from dirt and gravel to chipseal and then were later paved. Officials say most heavily trafficked roads within the city limits need to be reconstructed starting with proper dirt work.

During the first Choctaw City Council meeting of December, city officials took action to approve two ballot questions that will go before registered voters within the city limits Feb. 11, 2020.
Residents will decide on two ballot questions meant to provide funding for major road repairs and improvements throughout the city limits.
The work leading to these two propositions began in May when a citizen-driven task force was started to do in-depth research on local road issues and come up with possible long-term solutions.
Being supported by two city councilmen and city staff, the mayor’s road task force formed three subcommittees, made up of citizens, to develop a plan for permanently fixing Choctaw’s road problems.
The road selection subcommittee, chaired by Choctaw-Nicoma Park Schools Superintendent Dr. Jim McCharen, determined the road assessment report developed by the city should be used as a guide for road selection.
With an estimated $400 million in road repairs needed citywide and about a $2 million annual operating budget, the road task force worked to determine a strategy to accomplish major road projects this century.
The finance subcommittee, chaired by Eastern Oklahoma County Technology Center Superintendent Dr. Terry Underwood, explored options for financing the city’s needed improvements.
An election subcommittee was also formed to develop and prepare for the logistics of a needed election to bring the plan before the people of Choctaw.
The current proposal, broken down into two separate ballot questions, would provide the city with an estimated $40 million in dedicated funding for roads over the next 25 years.
The plan has two crucial elements, and both ballot questions will need to be approved by voters to ensure all major road problems are addressed in the near future.
The first proposition calls for general obligation bonds, while the second proposition calls for a new three-quarter cent sales tax.
The first proposition calls for the city to take on general obligation bonds in a sum not-to-exceed $13 million.
Those funds would go toward the following projects that the mayor’s road task force has identified as some of the most critical:

Remaining funds would be utilized for finishing the above projects or additional street projects.
City officials say a 6-mill levy would be the target to accomplish this portion of the road project funding.
The tax would be added to the property taxes of homeowners in the city. For example, a 6-mill levy on a $100,000 home with a homestead exemption would result in property tax increase of $60 per year, or $5 a month.
The long-term plan would have the city returning to the voters sometime in the next 10-15 years to authorize additional bonds that would be issued as the older bonds are paid off. That would allow the city to take on addition road improvements, while maintaining the 6-mill levy target without further increasing property tax bills.
The second proposition will request voters to approve a new three-quarters of one percent excise tax.
The new sales tax (0.75%) would go strictly toward constructing, improving, repairing and the maintaining of streets, roads, alleys, bridges and sidewalks.
The proposed new sales tax is meant to be a permanent increase intended as a long-term solution for road repairs  and improvements, but the tax could be undone later with similar action by the City Council and a vote of the people.
If approved, the sales tax rate in Choctaw would go from 8.75 to 9.5 percent.
City officials say that increase should produce an estimated $1.1 million in revenue a year dedicated strictly to road improvements.
There are currently 33 cities in Oklahoma with an equal to or higher sales tax rate as what is proposed for Choctaw.
City officials say the increase would put Choctaw slightly above its nearest major competitor for sales tax revenue, Midwest City.
For comparison, neighboring Midwest City is at a 9.1 percent sales tax rate.
However, Midwest City has far more avenues for sales tax generation (retail businesses), which is how cities in Oklahoma fund most infrastructure improvements and other services.
To an average shopper, that means a $100 purchase in Choctaw would produce 75 cents to go directly to funding road improvements in the city. Spending $100 in Choctaw would result in $9.50 in taxes, while shopping in Midwest City adds $9.10 in taxes to a $100 purchase.
Road projects listed as priorities to be targeted with funds generated from the sales tax increase include:

How did Choctaw’s roads get so bad?

City officials say the in-depth road study included core samples throughout the city that revealed many  roadways are unsafe and irreparable.
The core samples revealed Choctaw’s road conditions are worse than they appear with many well-traveled roads having little to no base. City officials say that’s why patching potholes provides a temporary fix at best.
Most roadways will need to be entirely reconstructed with proper dirt work and a curb and gutter road bed construction process to ensure the roads are safe and repairable moving forward, says mayor Randy Ross.
With a small population and low sales tax revenue, Choctaw had long been dependent on Oklahoma County for assistance with section line roads.
Decades ago Choctaw’s roads were dirt and gravel, but then the county assisted the city with putting down chipseal roads. Those roads were later patched and paved over.
For the most part, properly constructed paved roads were never built within the city limits.
Meanwhile, the population in the area increased rapidly, while sales tax collection (the city budget) remained low.
Now Choctaw’s population is too high for Oklahoma County to be required to assist with roads, and the current District 2 Oklahoma County leadership has made it clear assistance to the city will not be voluntarily offered.
Choctaw’s last election to fund road improvements and maintenance was in 1999 for a total of $2.8 million. That seven year sales tax increase expired, and so ended any major road repair and maintenance by the city.
In recent years sales tax revenue has increased with new retail businesses establishing locations within the city,
City officials say the operating budget has doubled in the last decade, but the costs associated with road construction still far exceed the city’s budget.
The current proposal would generate an estimated $40 million in dedicated funding for streets over the next 25 years.
“Choctaw was dependent back then on Oklahoma County to perform and fund road work. The sales tax base back then was low. With a growing and expanding sales tax and increased usage of our roads now is the time to look forward and not backward,” said Ross. “Those that choose to look back generally have no plan to move forward.”