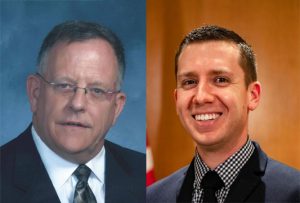 Pat Byrne said a lot has changed at city hall over the last four years.

He was elected to the city council in 2016 in wake of a mayoral recall election and rifts between city leaders, employees and citizens.

“There was a lot of contention. We made it pretty clear that that’s not what the city is about. We needed to listen to the citizens and listen to our employees, especially our senior staff because those are the experts on running the city,” Byrne said.

Byrne said that approach worked, and the city has gradually rebuilt trust among its employees and public.
“I think that has improved drastically in the last few years,” he said. “There is a lot more transparency with what’s going on. There are a lot more open discussions between staff and citizens and between staff and the council.”

Byrne is asking voters in Ward 2 to allow him to continue serving another four years. He will face Nicholas Timme in the election on Feb. 11.
If re-elected, Byrne said he will be a good steward of public dollars and trust and continue to promote economic development and attract new residents.

“We have to do whatever it takes to make Midwest City marketable for not only these businesses, but people to build homes here,” Byrne said. “We need to sell the city.”
Byrne has become a champion for addressing infrastructure, primarily stormwater drainage issues. He said the city is working to create a comprehensive plan to fix trouble spots for stormwater drainage and a funding source.

“They’re going through the process of identifying locations,” he said. Then they will prioritize it and we’re going to put together a plan to fund it, hopefully without raising taxes.”
Byrne is helping update city ordinance as part of the ordinance review committee. He also said the city needs to continue working with local schools, state legislators, Tinker Air Force Base and the City of Norman with their plans for indirect potable reuse for Lake Thunderbird.

Byrne is a native of upstate New York. After graduating from high school, he joined the United State Air Force. He served from 1973-1980 and was primarily stationed at Tinker Air Force Base. He later joined the Oklahoma City Police Department and served for more than 31 years.

“I’ve had that service mentality for a long time,” he said. “My grandfather and father were both firemen so it’s been in my blood for years and I enjoy it.”
After retiring from the police department, Byrne worked as director of security for Chesapeake Energy Arena. He scaled back his role to focus on security during Oklahoma City Thunder and Oklahoma City Blue games.

Byrne was elected to the city council in 2016 after defeating incumbent Rick Rice.

His wife Suzi is a Midwest City native and retired employee at Tinker AFB.

Nicholas Timme has a love for his hometown and a passion to make a difference.

And he hopes to put those together as the next member of the Midwest City Council.

“I want people to be so proud of Midwest City and encourage their family and friends to come here,” he said. “It bothers me when people say they don’t know where Midwest City is, or they have a negative perception of it.”

Timme is a longtime Midwest City resident and serves on the city’s Traffic and Safety Commission. He is currently pursuing a master’s degree from the University of Oklahoma and works at Tinker Federal Credit Union at Tinker Air Force Base.

Timme was born and raised in Midwest City and graduated from Carl Albert High School in 2012. He attended Rose State College and later University of Central Oklahoma where he earned a bachelor’s degree in business management with a minor in human resource management.

After college, Timme joined the Oklahoma Army National Guard and became certified public affairs specialist. When he returned home from basic training and technical school, Timme said he considered pursuing a commission in the Army but decided to return to school. He is earning a master’s degree in public administration from the University of Oklahoma.

“It wasn’t really for me and what I wanted to do,” Timme said. “I knew I was going back to school anyway, so whenever I went back to school at OU I joined their ROTC program and when I graduate, I’ll also be commissioned as officer in the Army.”

Timme serves on the Traffic and Safety Commission of Midwest City since spring 2017. He was appointed to the board by Mayor Matt Dukes and served as chairman for about a year. Timme said he had an interest in local government and approached Dukes about it during his monthly coffee meeting.

“He said he thinks it’s important for the younger generation to be involved,” Timme said.

“Public perception is typically public reality, and if citizens perceive there is a problem. It’s not necessarily my job to tell him there’s not,” he said. “It is my job to mitigate it to make them feel more comfortable in the situation.”

Timme said, if elected, he would work to improve the city’s image and attract new residents. He said the city needs to work on improving its appearance with such things as street striping and streetlights.

“We have streetlights that don’t match, or some are burned out and some have a different type of bulb it looks tacky,” Timme said. “People don’t understand that streetlights are run by OG&E they just know it looks tacky and it comes to public perception.”

He said the city also needs to do a better job of marketing to young professionals and first-time home buyers.

“We’re losing a lot of ground to the free and clear areas that are Choctaw, rural Oklahoma City, Moore and Norman,” he said. “A lot of people want their big sprawled out houses and stuff, but for people who are just now getting out of school trying to become adults the appeal of the small houses of Midwest City should resonate really well. A lot of people don’t know about it or their perception of Midwest City that blocks them from it.”

Timme said he feels a responsibility to encourage the next generation to get involved in their community.

“After the past election cycles a lot of the young generation seems to be disconnecting more and more and I don’t necessarily feel like that’s right,” he said. “They need role models. They need tosee the system isn’t broken.”

Timme said he became interested in politics at a young age. Some of those earliest memories include attending a celebration at the State capitol after the dome was added in the early 2000s and in 2005 for Gov. Brad Henry’s inauguration.

He has helped in several local and state campaigns and even considered a run for state office a few years ago.

“I thought about running just for the sake of seeing how far my campaign experience and public skills would take me,” he said. “But now at the city council level, I feel like I’ve been exposed a lot better. I’m aware of a lot more issues. I can relate to people and a lot more things like that.”