Stephen Cooper wants to be voice for all

Stephen Cooper has always had an interest in national politics.

A couple of years ago, he started paying more attention to issues facing his community.

“I always liked the political process and just recently started looking more at the local level and realized I can make a difference here,” he said. 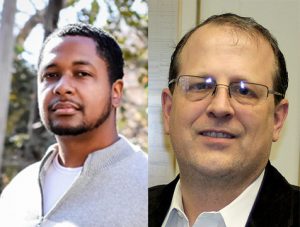 Cooper believes many people are not served or represented by their local government and hopes to change that as the next city councilman. He is one of three people running for the Ward 4 seat, along with incumbent Sean Reed and Ryan Cooper, no relation.

“There are a lot of marginalized communities, like single parents, women, children, LGBT and others who do not feel like their voice is being heard,” he said. “I am passionate about getting more people involved.”

To build that connection, Cooper says elected officials must listen and act.

“People have a lot of ideas and concerns but don’t think they will be heard by our current elected officials,” he said. “I think I can relate to people and get them involved in election, in city council and others.”

Cooper is supportive of the city’s efforts for economic development. He said the Town Center development on SE 29th Street was amazing and was equally pleased with the recent development of the Sooner Rose Shopping Center and Warren Theatres.

Like many residents, Cooper is concerned about the future of the old Heritage Park Mall building. He believes city leaders are working to improve the property but wants more transparency.

“I know the city can’t talk about the specifics, but the community needs to know something,” he said. “In the Navy, our commanding officer would say that he can’t tell us everything about certain things but would let us know something, so we weren’t completely in the dark.”

Cooper was born in Weatherford and grew up in Midwest City and attended Mid-Del Schools.

After graduation, he joined the U.S. Navy in 2007 and served for four years, including deployments to the Persian Gulf and the Horn of Africa.

After being honorably discharged, he and his fiancé returned to Oklahoma. They moved to Norman to attend the University of Oklahoma and were married.
The couple had two children before she passed away in 2017.

Cooper later moved back to Midwest City to be closer to family and he now works at Tinker Air Force Base as logistics representative for Boeing.

Cooper is involved in the Young Democrats of Oklahoma, serving as chair of the veterans caucus. He also organized the Oklahoma Zulus, a group that uses hip hop culture to spread positive messages and peace. Cooper said the group has held clothing and food drives and events.

The Ward 4 election is set for Feb. 11. If necessary, a run-off election will be held April 7.

Sean Reed is proud of what Midwest City has accomplished during his first term as Ward 4 City Councilman.

But believes he’s just getting started.

“I feel like the last couple of years I have finally gotten my feet under me and understand how city politics work,” Reed said. “We’ve come a long way on economic development and relations in the city, but there is still a lot of stuff that we want to accomplish.”

The local business owner and longtime resident is running for a second term on the city council. He was elected to office in 2016 during a transition period at city hall.

“Coming in four years ago, it was very difficult to get people to trust one another,” he said. “We spent the two years building bridges and relationships. Other than my name, people didn’t know what to expect from me. But the last four years I have a record to support that and have built personal relationships with the department heads.”

Reed will face Stephen Cooper and Ryan Cooper, no relation, in the Feb. 11 primary election. If none of the candidates received at least 50 percent of the vote, the top two will move on to a general election on April 7.

Reed comes from a long line of Midwest City public servants. His father Eddie and grandfather Marion both served on the city council and mayor.

He has also followed a family tradition in business with Reed’s Tax Service. After working in finance and mortgage industry for several years, Sean rejoined the family business in 2010 and worked alongside his father before purchasing the business in 2017. His grandfather opened the tax office in 1943 and it is the oldest business in the Midwest City.

Reed said some of his priorities during the next four years would include economic development, improving the hospital, revitalizing Air Depot Boulevard and the old Heritage Park Mall and Sears building.

The mall is a topic of interest for residents throughout the city. Reed said the city cannot comment about the main portion of the mall due to pending litigation. The mall owner has challenged municipal building and fire code fines in district court.

Midwest City recently purchased the former Sears building with hopes of redeveloping it.

“The city is going for a home run that will not just change Ward 4 but the whole city if it happens,” Reed said about the city’s plans for the property.

Reed says he wants the city to continue pushing for economic development. He believes the area near SE 29th Street and Douglas Boulevard is primed for big things with the addition of the new multipurpose sports complex, which was included in the 2018 general obligation bond issue.

“I wouldn’t be surprised to see hotels, restaurants and shopping pop up,” he said.

He would also like economic development work its way up Air Depot Boulevard.

“It’s the front door to Tinker Air Force Base and it should be vibrant,” Reed said. “I want it to be a place where you can come and shop, eat, get your taxes done or whatever. Right now, it’s past its former glory days.”

Reed is also passionate about AllianceHealth Midwest. He wants to see the hospital continue to improve its service and reestablish itself as a source of pride for area residents. Reed and Mayor Matt Dukes both serve on the hospital board.

“I’m extremely pleased with what the CEO (Clay Franklin) is trying to do and the message he brings to those who use it,” Reed said. “I think they run into some issues with the corporate headquarters and how they allocate funds for things.”