Choctaw voters have rejected two propositions meant to fund road reconstruction throughout the city limits.
The Feb. 11 election produced a significant turnout of registered voters on both sides of the issue.
In the end, over 22 percent of the city’s registered voters exercised their right to vote and soundly defeated both ballot propositions.
With just two questions, the election brought out 659 more voters than the April 2019 election that determined Choctaw’s mayor and also selected three of the seven City Council members. 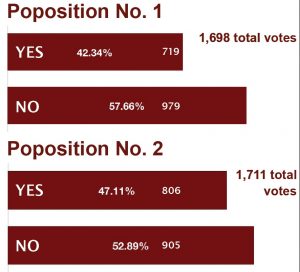 The road reconstruction proposal was broken into two separate ballot questions, and would have provided the city with an estimated $40 million in dedicated funding for roads over the next 25 years, while increasing sales tax revenue for continued road maintenance for the long term.
The first proposition called for the city to take on general obligation bonds in a sum not-to-exceed $13 million.
If approved, the proposition would have resulted in a tax increase to property within the city limits to pay off the bonds.
With 1,698 voters weighing in, voters rejected proposition No. 1 (STREET PROJECTS) by a vote of 979-719.
The second proposition requested voters to approve a new three-quarters of one percent excise tax to provide for long-term road reconstruction and repair.
If approved, Choctaw’s sales tax would have climbed from 8.75 percent to 9.5.
With a total of 1,711 City of Choctaw residents casting ballots, proposition No. 2 0.75% SALES TAX – STREETS) residents voted 905-806.
Opposition outnumbered supporters of proposition No. 1, to raise property taxes, by 260 votes, while only 99 votes separated the supporters and opponents on ballot question No. 2.
While disappointed with the outcome, mayor Randy Ross was happy to see such high participation numbers in the election.
“I’d like to say thank you again to everyone for their votes on both sides of the issue. The right to vote is at the core of our democracy and am glad to see that so many did,” said Ross.
Ross, who was re-elected for what he says is his final term last April, says the city will continue to focus on increasing sales tax revenue in an effort to address road deterioration as best as possible.
The 15-year mayor also hopes to see continued public interest and participation as the city works to improve infrastructure and services to a growing population.
“In the short term, we will continue to work with our developers to attract new businesses to The Markets. We will also encourage private ownership groups such as the plaza to bring tenants into their space. Sales tax dollars are the lifeblood of our city and will be our best shot at improving our infrastructure. Unfortunately, it will just take longer,” said Ross. “Long term, we still would like to have a comprehensive strategy. I will be asking our city staff to set up an ‘idea box’ online where citizens can submit plans to generate revenue, cut costs, and find solutions.”
Feb. 12 city staff setup a new suggestion box to encourage residents to be more involved and possible helped develop an updated plan to “move Choctaw forward.” Ideas, suggestions and plans can be sent to the city at ideabox@choctawcity.org.