With several hundred taking to social media and nearly 100 more sending hand signed character letters to a local family, the community has rallied behind a Choctaw man accused of verbally berating and pushing a firefighter. 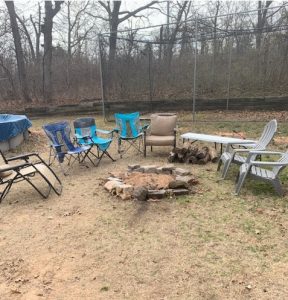 The site of a backyard fire that resulted in local fire departments being dispatched to investigate.

On Sunday, March 1 an Oklahoma County Sheriff’s Office deputy responded to a home near SE 15th and Peebly Road to investigate a man accused of assaulting a firefighter.

Witnesses say several families were attending a cookout and gathering at the home of 41-year-old Jeremy Johnson.

The party would come to an end when Johnson was arrested and booked into the Oklahoma County jail on a complaint of assault and battery on an emergency care provider.

“There were seven or eight people still sitting around a small fire that was just a couple smoldering logs, maybe two feet wide, in the backyard. When a female firefighter showed up, she said she had a call of a large fire in the Choctaw area, but admitted ours was no concern. But she wouldn’t leave or radio in that no additional response was needed, and more firefighters kept coming to the house,” said witnesses in attendance before, during and after the arrest of Johnson. “They kept showing up, and they weren’t wearing gear or uniforms to signal that they were even firefighters.” 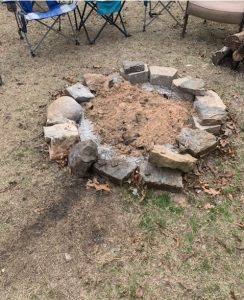 The scene of the fire after being extinguished with sand by partygoers following the arrest of homeowner, Jeremy Johnson.

Witnesses say those firefighters were repeatedly asked to leave and to not enter the home, as Johnson’s 13-year-old daughter and her friend were the only individuals inside.

However, Johnson’s daughter soon ran to get her father from outside after discovering unknown men had let themselves into the residence.

Witnesses say that’s when Johnson confronted the firefighters gathered in his front yard.

“We had a deputy receive a call of an individual physically assaulting a firefighter. Said that he would track down the firefighter and kill him,” said OCSO spokesman Mark Myers. “He definitely shouldn’t be laying hands on him.”

When the OCSO deputy arrived, Johnson was arrested for pushing a firefighter.

“No one ever answered about who was in the house, and how long they were in the house. We didn’t know who anyone was, and they were all just wearing t-shirts. His daughter was not dressed appropriately, and you don’t let your teenage daughter be in that situation,” said witnesses.

“The firefighters just stood there the entire time staring and making jokes as Johnson was arrested, and his daughter cried. They never put out the controlled fire, and had no business being on the property or in the house for the amount of time they loitered there after being asked to leave.”

The residence was not subject to municipal burning permits, and no burn ban was in effect at the time of the incident.

Harrah was the responding agency, and the Choctaw Fire Department arrived on scene to assist with the investigation.

It was a Choctaw firefighter that was allegedly pushed by Johnson. That firefighter is the son of Harrah Fire Chief, Neal Young.