The Choctaw-Nicoma Park School Board accepted the retirement resignation of Dr. Jim McCharen at Monday evening’s regular monthly board meeting.

McCharen is completing his 48th year in education, and 38 of those years have been in the Choctaw-Nicoma Park School District.

He has served as a classroom teacher, coach, the athletic Director, the high school principal, the assistant superintendent and the last eighteen years as the superintendent.

His last day as CNP superintendent will be June 30. 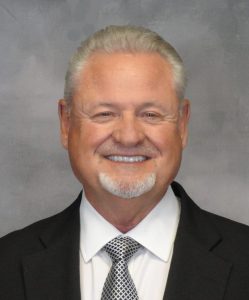 “While I look forward to enjoying my retirement, I will deeply miss being the Superintendent of CNP Schools for many reasons.  It has been an honor and blessing to serve CNP Schools for thirty-eight-years. My retirement decision was difficult because I have a passion for this school district and love being the superintendent. The ingredients are in place for CNP to continue its high level of success and excellence. Our district is very unique for a large 6A school district in the fact that we truly have a family culture and a district unity that is unmatched by most large districts anywhere.  Another big reason I love being the CNP Superintendent is that I have the best school board in the state. Their trust in me, confidence in me, and support for me is appreciated beyond words.  Our school board has played a huge role in making CNP Schools the envy of the state.  Their professionalism, wisdom, and unselfish teamwork has served this district well, and will continue to do so in the future. The school board and I have always met challenges with a united front resulting in collaborative solutions. Like most large suburban districts, we have dealt with severe budget cuts, rapid district growth, tragic deaths of students and staff, wildfires, tornadoes, demographic changes, teacher rallies, teacher walkouts, and the latest challenge the Coronavirus. Through all of these challenges, our district has always remained strong and unified,” said McCharen.

After being an assistant football and baseball coach in Moore for six years, McCharen came to Choctaw High School in 1979.

He was the offensive coordinator for the Yellowjacket football team and the head baseball coach. During his six years as the Choctaw football offensive coordinator, the Yellowjackets went to the playoffs five times and the State-Quarter Finals in 1981. McCharen was the Choctaw High School Baseball coach from 1980 to 1987.  During that time, the Yellowjackets won 204 games and lost 64 for a winning percentage of almost eighty percent.  McCharen’s teams averaged over 25 wins a year. Under McCharen, the Yellowjackets won numerous tournament championships, conference championships, and regional championships and were State-Semi Finalist in 1982 and State-Runner up in 1981 and 1987.  The 1987 Yellowjacket team was ranked the number one high school baseball team in the United States for most of the season.  During his coaching tenure, McCharen had four players that went on to play professional baseball. He won numerous local, state, and national coaching awards. McCharen was inducted into the Choctaw High School Athletic Hall of Fame as a Coach in 2013. Many former players and community members still refer to him as “Coach” McCharen.

Dr. McCharen has always been involved in local community clubs and organizations.  He is a past president of the Choctaw Chamber of Commerce and serves on the Board of Directors for the Choctaw Economic Development Authority. He is a member of the Cooperative Council of Oklahoma School Administrators and is a past president of the United Suburban Schools Association.  McCharen also serves on the Oklahoma State Board of Directors for the Oklahoma Association of Impact Aid to Schools. In addition, he serves on the Rose State College Board of Governors. McCharen has participated in many community activities sponsored by Tinker Air Force Base including the COMSTAR program. He has been a passionate and persistent advocate for his district and public education at the State Capital and Washington D.C.  He has spent hundreds of days at the state legislature fighting for more funding for schools and better pay for teachers and support staff. McCharen’s excellent relationship with city officials and civic groups has enhanced the success of CNP Schools. He has maintained a great working relationship with all the mayors and city managers of Choctaw, Nicoma Park, and Midwest City.

Listed below are just some of the accomplishments Dr. McCharen is most proud of during his 18 years as CNP Superintendent:

*In the last eighteen years, the district has passed six bond issues totaling 135 million dollars in capital improvement funds.  The bond issues passed with an average of eighty-five percent approval from voting patrons. The district has completed twenty-one major building/facility projects over the last fifteen years including two new schools. The two new schools (Choctaw Middle School and Nicoma Park Elementary) won National Architectural Awards for design and instructional functionality. CNP Schools has some of the finest academic, athletic, and fine arts facilities in the state.
*All six of CNP Elementary Schools are “Great Expectations” Model Schools. Out of approximately 1,500 Elementary schools in the state of Oklahoma only seventy-five are “Great Expectations” Model Schools and six are in the CNP district. Great Expectation Model Schools achieve this distinction by a rigorous yearlong evaluation process regarding school culture and academic standards.
*Coordinated with Rose State Presidents Dr. Britton and Dr. Webb to include Choctaw High School in the “Ticket to Rose” program allowing eligible Choctaw High School Seniors to receive tuition waivers at Rose State College.
*Instructional technology has been upgraded throughout the district and in every classroom.  In addition, every school site has a state of the art media center anchored by technology.
*Choctaw High School has received numerous awards and recognitions from the Southern Region Education Board over the last 18 years.  In addition, CHS has won the Southern Region Education Board Gold Achievement award five times in the last eight years. This is a National distinction based on rigorous standards assessed by a nation-wide team of educators. Choctaw High School was named as a “What Parents Want” School District by the National Educational Institute. *Choctaw High School’s Alternative School for at risk students has won the State Award of Excellence as one of the best Alternative schools in the State and was recognized in 2010 as one of the top three Alternative Schools for at risk students in the Nation.
*Along with staff and school board, reconfigured grade levels and transitioned Choctaw Jr. High and Nicoma Park Jr. High into true Middle Schools.
*Transitioned ninth graders into the new Freshman Center on the campus of Choctaw High School. This allows freshman to integrate into the high school culture within the supportive environment of their own facility and teachers.
*Established a STEM Bio-Med Program at CHS. One of the few in the state housed at a public high school.
*Choctaw High School students consistently rank at or above the State and National average on the ACT college entrance exam. Individual students are frequently named National Merit Scholars, National Achievement Scholars, State Regents Scholars, and Academic All State.  Our academic teams from elementary school through high school excel in academic tournaments and competitions.  Our Choctaw High School Academic team won the 6A Quiz Bowl State Championship in 2017 and 2018. In addition, we annually send students to the Oklahoma School of Science and Math, and approximately 80 percent of our CHS graduates go on to attend college.
*The district has received numerous State and Federal Grants over the last several years benefiting student achievement and addressing student trauma.
*CNP Schools has a ninety-three percent parent participation rate, resulting in collaborative accountability of our students.
*Encouraged all nine CNP schools to have the same mascot (“Yellowjackets”) instead of nine individual school mascots, thus unifying the CNP School District (Pre-K thru High School).
*Established award winning Air Force JR ROTC program that has won numerous state and regional drill contests and received the National Distinguished Unit with Merit Award. This is a very prestigious award given to a select few JR ROTC units across the US.
*Committed major resources to all our fine arts programs, which are now exceptional. CHS Drama Program has won fourteen 6A Drama State Championships over the last sixteen years, in addition has garnered several national awards. Our Jazz Band won back-to-back State Championships in 2018 and 2019. Our Marching Band, Winter Guard, and Choir programs are among the best 6A programs in the state and annually win state, and national contests, championships, and awards.
*During McCharen’s eighteen years as superintendent CHS athletic teams, academic teams, and fine arts programs have won thirty-one State Championships and ten State-Runner Ups. In addition, during the same eighteen-year period CHS teams have won twenty-seven Athletic Academic State Championships.
* In conjunction with the Alumni Museum Committee and Choctaw Alumni Association began the process to build a first class CNP School museum. A collection of memorabilia is currently on display in a temporary museum at the district office.

“Everything we do in the CNP School District we do well and always expect excellence. I want to sincerely thank my exceptional CNP colleagues for their support.  It has been an honor to lead this school district and work with the best and most dedicated administrators, teachers, and support staff in the state. What educators do is not fully understood by those outside the profession. Every day they impact the lives of students. Being a public school teacher is very challenging but somehow our CNP staff pull it together every day to create a safe, nurturing, and effective learning environment for our students. In CNP Schools every decision we make centers around what is best for our students.  As superintendent, I have observed the positive influence our CNP staff has had on the lives of thousands of students. I marvel every day at their passion, dedication, work ethic, and love for kids.  We have high expectations of our students and truly believe all children can learn in their own way. Our approach with students is based on a climate of mutual respect, caring attitude, and fostering individual relationships,” said McCharen. “In the future, I will do everything I can to assist the school district in whatever capacity is needed. Even in retirement, I will continue to be CNP’s biggest advocate and supporter. I will forever be a Choctaw Yellowjacket.”

In terms of how McCharen will spend his time in retirement, “I have far too many hobbies and interests to even begin to mention. The list is very long. I will certainly not have any problem filling my days with activities I enjoy.  I have two grandsons I enjoy spending time with that attend CNP schools, so I am definitely not moving anywhere soon. No doubt you will see me a many CNP games, events, programs, and activities.”