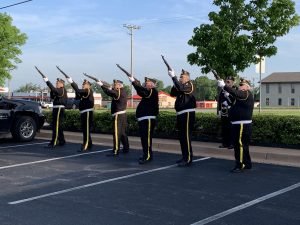 As the wind whipped the flag under a bright blue sky Friday, Mustang American Legion Post 353 members gathered to honor the men and women who keep Mustang safe.
“We gather each year to commemorate National Peace Officers Memorial Day and to thank our members of Mustang Police Department, who sacrifice much more than many people realize to ensure our community remains all it is and can be,” Post 353 former commander John Bishop said last week.

The ceremony – held in front of Mustang police station – includes a time to remember fallen police officers across Oklahoma and the country. National Law Enforcement Officers Memorial Fund documentation showed two members of Oklahoma law enforcement so far in 2020 died in the line of duty.

One of those was one of area law enforcement’s own – Canadian County Sheriff’s deputy Lt. Shirley Lanning was killed in a Feb. 14 automobile accident while on duty. She was 58 years old and worked for the department for six years, before that serving at Oklahoma County Sheriff’s office, U.S. Marshal’s office and University of Central Oklahoma police force.
Mustang Police Chief Rob Groseclose and several of his officers attended the outdoor ceremony, which included Legionnaire John Traffanstedt playing taps and a 21-gun salute.

Peace Officers Memorial Day is part of Police Week, created in 1962 with a proclamation signed by President John F. Kennedy. While through the years since its founding the day and activities related to it increasingly expanded, this year – like everything – was changed by the ongoing coronavirus pandemic. Instead of their usual close quarters, interaction between police officers and Post 353 members was limited by social distancing restrictions.

The pandemic was another reason why acknowledging officers and staff of Mustang Police Department was so important, particularly this year, Legionnaire John Sherrick said last week.

“They are on the front lines, taking chances every single day in situations that could change in the blink of an eye,” he said. “When you throw in COVID-19 and the risks associated with that, it’s just compounded, and we all should remember and appreciate that.”

More information about National Police Memorial Day can be found on the NLEOM website, located at https://nleomf.org/.