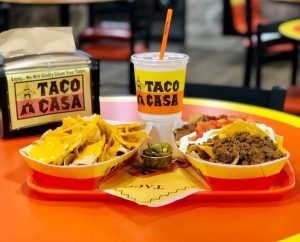 Canadian County residents have a new Mexican restaurant to try this summer. Construction is under way for a Taco Casa at 12424 NW 10th Street. It will be located across from Arby’s in the Market at Czech Hall.

“We are thrilled to become part of the Yukon community. My wife’s family was in the grocery store business in Yukon (Snyder’s IGA) for a long time so that makes it all the more special for us,” said Taco Casa owner Tyler Patterson.

Taco Casa was started in 1972 and takes great pride in freshly made Mexican food. On the menu you’ll find tacos, nachos, burritos, salads and much more.

“At Taco Casa we cook our own beef, cook our own beans, shred our own cheese, slice our own tomatoes, and fry our taco shells in coconut oil every morning. We pride ourselves in cooking fresh food for our Taco Casa fans daily,” said Patterson.

Taco Casa is estimating an opening date sometime in the first few weeks of July. The restaurant already has a great following with other locations in Moore, Norman and Midwest City.
“Friendly, good food and my favorite go to for tacos,” said customer Amanda Jean.

The Market at Czech Hall is the fastest growing retail space in the area. It’s located on the southern side of Yukon, along Interstate 40. Other restaurants in the area include Cheddar’s Scratch Kitchen, Lone Star Steakhouse and Hooters.