Local schools were well represented on the all-state team.

The Oklahoma Baseball Coaches Association last week announced their all-state teams. The organization has not yet decided if an all-state game will be played. 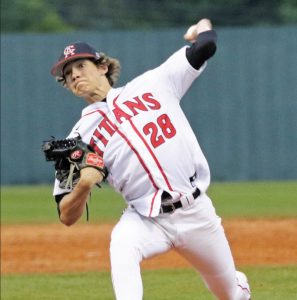 Carl Albert and Choctaw each had two players selected to Large West team, and Jones had one named to the Middle West team.

Carl Albert infielder Jake Estes and pitcher Carson Thomas were both named to the all-state team.

The Titans were coming off a state championship appearance and went 2-0 this season.

Corbin Talley, of Jones, was selected to the Middle West squad. The Longhorns pitcher plans to play at Butler Community College next season. Jones went 2-0 this season with a pair of wins over Meeker.

The OBCA also announced its all-star team. Midwest City’s Collin Wilmoth and Choctaw’s Cooper Harris and Jordan Brewer were named to the Class 6A West team. Carl Albert’s Jake Estes, Carson Thomas, and Caden Favors were picked for the 5A all-star team. Harrah’s Shea Morrison was an all-star in 4A, and Corbin Tally, of Jones, in 3A.