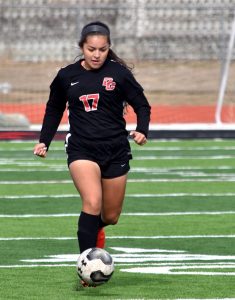 The Oklahoma Soccer Coaches Association last week announced its all-state teams which included players from Carl Albert, Choctaw, Del City, Harrah and Midwest City. The all-state games were canceled this year due to the coronavirus.

Each school could nominate two position players and one goalkeeper. The nomination process resulted in rosters that are larger than usual. The all-state teams are open to seniors.

“The OSCA recognizes this year is extraordinary and felt it would be best to honor the seniors who did not get to finish their high school soccer career,” said Dale Watts, OSCA executive director. “Some schools managed to play 5 games prior to the shut down, and others had not yet played a game.”

Choctaw’s Jacob Dunning (midfielder) and Mia Pendleton (goalkeeper), and Midwest City’s Kennedy Lampley (midfielder) were named to the Class 6A West squads. Midwest City went 1-2 this season with a win over Del City and losses to Enid and Shawnee. The Choctaw girls lost their only game to Moore, and the boys were 0-3.

Harrah had three players on the Class 4A West teams. Braden Muck (goalkeeper) and Chase Palmer (midfielder) were named to the boys team and Jessica O’Dell (defender) to the girls team. Both Harrah teams lost their only game of the year to Weatherford.