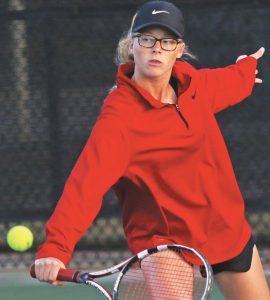 The Oklahoma Coaches Association recently announced its all-state boys and girls teams for the East and West. Ten players were picked for each team.

Carl Albert’s Morgan Toney and Elise Wall and Taryn Clark, both of Christian Heritage Academy, were named to the West girls team. Harrah’s Caleb Hughey was the lone local all-stater on the West boys team.

This year, Toney took first in No. 2 doubles at the Pauls Valley Tournament, and second at No. 2 singles at the Carl Albert Tournament. She was a state runner-up in 2018 along with Taryn McLaughlin at No. 2 doubles and placed sixth at state last year at No. 1 doubles.

Wall and Olivia Curtis won the No. 1 doubles state title in Class 4A last year. Clark was a state runner-up in 2019 at No. 2 singles.

Hughey placed fourth at state at No. 1 singles as a junior in 2019.

The OCA also announced that it has canceled its annual coaches clinic and all-state games due to COVID-19. The organization has hosted the events since 1935. The OCA Hall of Fame Banquet has also been postponed to 2021.

The OCA All-State activities were originally scheduled for July in the Tulsa metro.