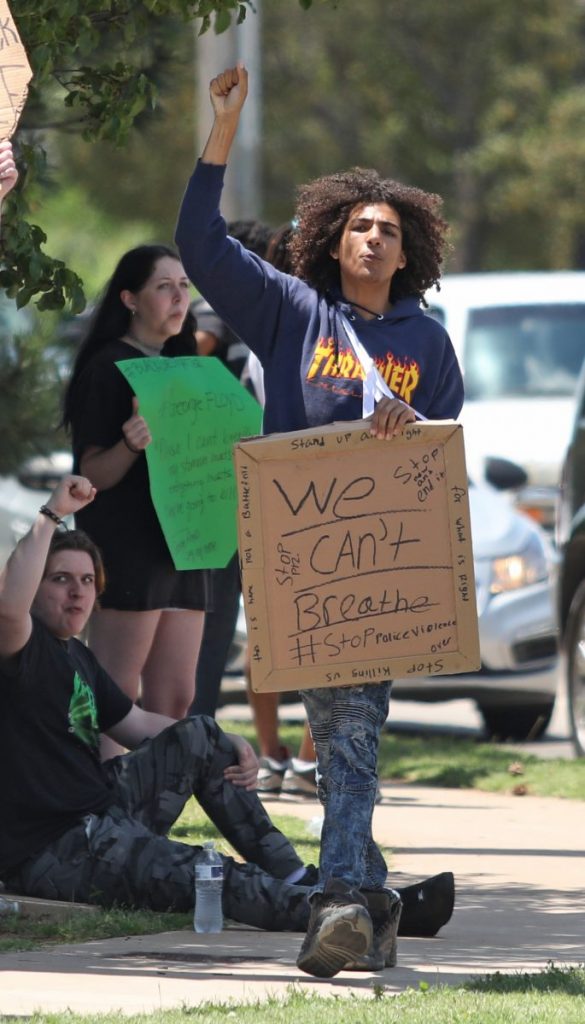 Calls for equality and racial justice rang out across the country this past week following the death of George Floyd in Minneapolis.

They could be heard in Midwest City thanks to a local teen.

Christopher Bibbs, 17, and his sister started a peaceful protest last Thursday. They held signs and called out for justice at the corner of Air Depot Boulevard and SE 15th Street. Many drivers honked in support.

“This is the first time I’ve done anything like this in the community, but I just felt like someone had to do something,” said Bibbs, who is a student at Midwest City High School. “Even though that happened in Minnesota, it still affects us here in Oklahoma.”

The chants from the intersection grew louder Friday afternoon as the crowd of demonstrators multiplied. The group protested on the weekend and plan to meet again.

Teronika Edwards, of Midwest City, was among those who joined the cause. She saw Bibbs protesting while driving by and joined in.

“I have lived here my whole life and it meant a lot to me to see him out here,” Edwards said. “Until we put our feet on the pavement, nothing is going to change.”

Bibbs said he always believed that African Americans are targeted in society, but never felt it personally. That changed when he saw the video of Floyd handcuffed, lying face down on the street with a Minneapolis police officer kneeling on his neck.

Floyd died shortly after the incident. All four police officers involved in the arrest were fired. Derek Chauvin, the officer who knelt on Floyd’s neck for more than 8 minutes, was arrested Friday for murder and manslaughter.

Floyd’s death has sparked protests, both peaceful and violent, in Minneapolis and other cities from coast to coast. Large demonstrations and marches took place in Oklahoma City over the weekend. The peaceful events were overshadowed by violence and vandalism that took place later in the evening.

The Midwest City group is preaching a message of peace.

“We’re out here peacefully protesting for black lives, because black lives do matter just like all lives matter,” Edwards said. “Black lives matter to us because we should not have to live in fear of stepping out of our house, or of police coming to our house and killing us and then not being charged properly.”

Bibbs said he will continue working to spread that message.

“I’m just a 17-year-old boy from Midwest City but I want to get more people out here spreading this message,” he said.