Megan Maloy has been hired as the new girls basketball coach at Midwest City High School, pending school board approval.

She was an assistant at Moore High School the past two years and previously coached at her alma mater Randall University. 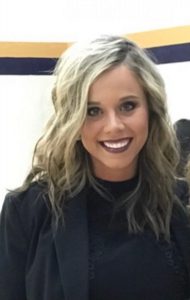 Megan Maloy has been hired as the new girls basketball coach at Midwest City, pending school board approval. (Provided photo)

“Midwest City is a powerhouse program and I’m so excited and thankful for this opportunity to coach these ladies,” Maloy said.

The Lady Bombers went 17-10 last season in McMullen’s only season and were one win away from qualifying for the state tournament.

Maloy is familiar with the Midwest City girls after scouting and coaching against them last season in the regional finals. She was impressed with the team’s tenacity on the court.

“It’ll be nice to coach them and not against them for a change,” she said. “They have a fire and passion for the game that you can’t teach.”

Basketball has been a part of Maloy’s life since she was young. Her father Mark Maloy coached boys basketball at Bethel and girls basketball at Earlsboro when Megan and her sister were in high school. He now serves as superintendent at Earlsboro. Her uncle Jeff Maloy was a legendary girls coach at Ada, where he won three state championships.

“Basketball is just part of our family,” she said. “When we’re together I like to pick their brains about coaching philosophies and what they’d do in different situations.”

In high school, Maloy played basketball, softball and even baseball. She went to Eastern Oklahoma State and Panhandle State University, before transferring to Randall University for her final two years. There, she helped Randall University to two ACCA National Championships in 2013 and 2014.

Maloy began her coaching career at Randall University. After one year as head coach, she wanted to move to high school and took a job at Moore.

“I really fell in love with coaching high school these last two years,” she said. “I like teaching lessons on and off the court. And it’s awesome to see girls grow from 14 to 18.”

Andy Collier, director of student activities for Mid-Del Schools, said Maloy is a “home run” hire for Midwest City. He said they were impressed with her passion for the game, experience and ability to connect with high school girls.

“Many big time coaches just raved about her,” Collier said. “She demands respect from her players and they really like her and like playing for her, which is not always the case.”

“She preaches defensive fundamentals and likes to let the girls play with more freedom on offense,” Collier said. “And that’s what our girls are really good at – putting pressure on defense and playing baseline to baseline.”

Collier said he believes Maloy will be with the school for years to come.

“I think the community will really like her and I think she found the job she wants and will stick with it,” he said. “We owe it to our girls and parents. They have had three coaches in three years, so we really wanted to make sure we found the right candidate.”