The Oklahoma State Bureau of Investigation is offering a $5,000 reward for information about the people responsible for the murder of a Choctaw man.
The body of Eric Trammell was discovered along a roadway in Choctaw in August of 2018.
The Choctaw man had been shot multiple times.
May 13 would have been Trammell’s 37th birthday, and as a reminder to the public, investigators are still working the cold case and announcing a cash reward for information.
Just before midnight Monday, Aug. 27, 2018 Choctaw officers were called to the 14200 block of NE 36th Street to check the welfare of a person reportedly lying on the side of the roadway.
Officers found the 35-year-old had died from multiple gunshot wounds.
OSBI agents located video surveillance footage, and discovered Trammell met with four men about 30 minutes prior to his murder.
Shortly after the homicide, images of suspects and a vehicle seen in that footage was released to the public.
One suspect, 20-year-old Jaylen Brown, was identified. 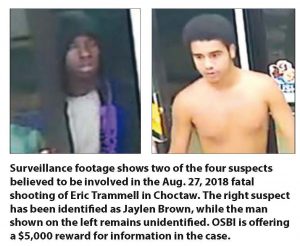 Investigators still need help from the public in identifying the three other suspects believed to be involved in the murder of Trammell.
Trammell’s 2018 murder was the first homicide reported in Choctaw since an April of 2013 murder. In that case, an arrest was made in less than a month after the crime.
Investigators, family and neighbors of Trammell hope to find those responsible and close this case.
If you have any information about the case or can help identify the men involved, contact the OSBI at (800) 522-8017 or tips@osbi.ok.gov. Those who assist investigators can remain anonymous.