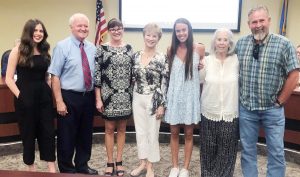 Jackie Harris celebrates with her family at the June 8 board meeting.

Harris is a CHS graduate from the class of 1990, and she has been a member of the CNP teaching/administrative teams since 1997.  Jackie has a strong passion for the CNP community. Her leadership is built around forming positive relationships and always basing decisions on what is best for students.
Her hiring marks a historic milestone as she will be the first female at the helm of Choctaw High School.
Also approved at last week’s boar meeting was the hiring of Amber Balderrama.
Balderrama has been named James Griffith Intermediate School’s next principal. 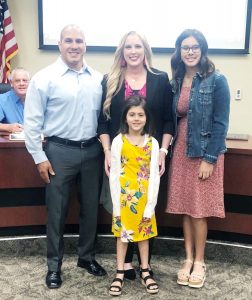