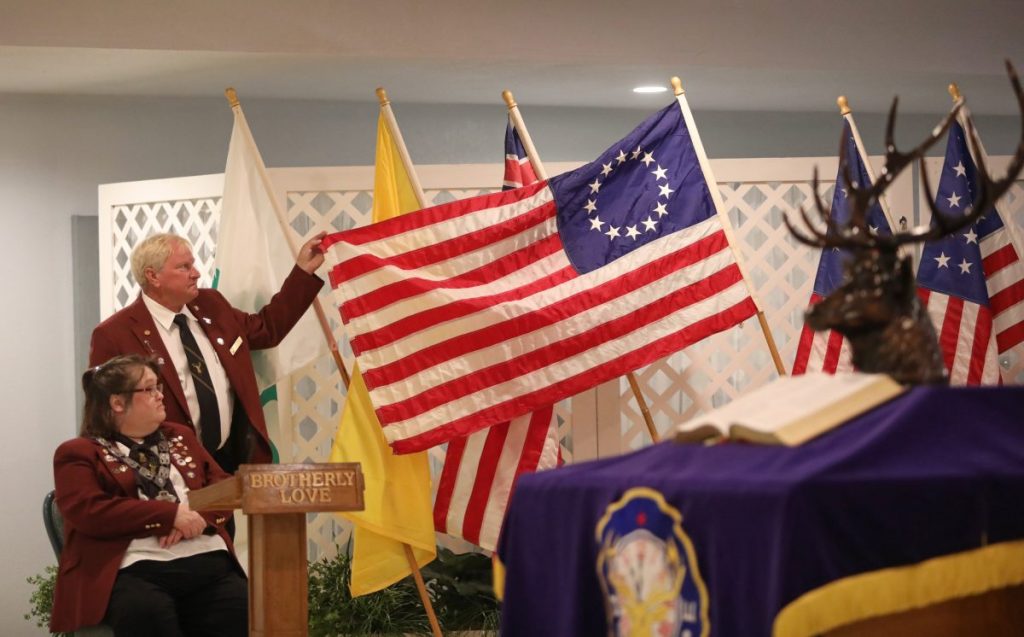 Stan Mills displays the Betsy Ross Flag Sunday during a Flag Day ceremony at the Midwest City Elks Lodge. The organization had to scale back their annual event this year due to COVID-19. (Photo by Jeff Harrison)

Countless events and celebrations have been canceled or altered due to the coronavirus.

When it came to honoring the American flag, the Elks Lodge No. 1890 chose the latter.

The group celebrated the history and significance of the red, white and blue Sunday afternoon during their annual Flag Day ceremony.

his year’s observance was closed to the public and did not include many regular segments such as a flag folding demonstration, vocalists, and a flag retirement. 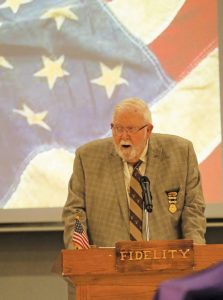 Jack Roper, past state president, read the “Ragged Old Flag” by Johnny Cash. The spoken-word song tells the story about a visitor meeting an old man in a town square, and they talk about the flag and what the country has been through together.

State President Jimmy Tilley delivered the history of the flag.

Guests watched a video about Sir Francis Scott Key and the history of “The Star-Spangled Banner.” Key wrote the lyrics for the American national anthem after watching the British bombardment of Fort McHenry during the War of 1812.

The group later watched a video of Red Skelton detailing the meaning of the “Pledge of Allegiance,” before reciting it together.

The Elks Lodge has been celebrating the birth of the flag since 1907. The Grand Lodge adopted mandatory observance of the occasion by every Elks Lodge in 1911, and that requirement continues.