Midwest City firefighters are mourning the loss of one of their own. 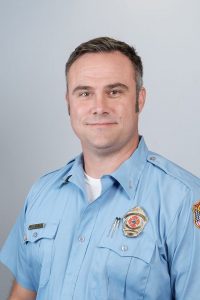 Ellis, 42, had been a firefighter for more than 16 years. He joined the Midwest City Fire Department in September of 2003. In 2012, he was promoted to the position of apparatus operator. He worked at Station 5 on S. Westminster Road.

Chief Bert Norton said the department was shocked by the news.

“Eddie was a good guy, a hard worker and he’d do anything for anyone,” Norton said. “Eddie will be greatly missed by his firefighter family and the community he served.”

He leaves behind a wife, Tia and two children, Jacie and Cami.

Ellis graduated from Midwest City High School in 1997 where he also played football and wrestled. He and Tia were high school sweethearts and married in February 2000.

As a father, Ellis always enjoyed watching his daughters in cheerleading and other sports activities.

When he was away from the fire department, Ellis enjoyed carpentry and spending time outdoors. He and a fellow firefighter also owned a construction company that built houses and remodel projects.

Funeral services have not been announced.