For Makale Smith, the transition from the hardwood to the gridiron was a smooth one.

The basketball standout quickly developed into a key contributor for the Midwest City football team last year, playing offense, defense and special teams. In the process, he also blossomed into a coveted college prospect.

It didn’t take long for Smith to make a decision. He verbally committed to Oklahoma State earlier this month. 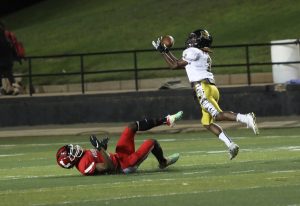 “I wanted to stay close to home and really like Oklahoma State,” Smith said.

The 6-foot-1, 175-pound senior is ranked as a three-star prospect by Rivals.com. He is listed as an athlete but says Oklahoma State coaches want him to play defensive back.

The recruiting process is a little different this year because of COVID-19. College coaches have relied on video more heavily. Smith said he hasn’t been able to visit the Stillwater campus yet.

“I’m still waiting to get there, but they sent me some videos and it looks great,” Smith said.

Smith is one of five Oklahomans to commit to the Cowboys. He is joined by Logan Nobles (Jenks), Jaden Bray (Norman), Collin Oliver (Edmond Santa Fe) and Ty Williams (Muskogee).

Smith played football in middle school but focused on basketball his freshman and sophomore years. As a junior, he led the Bombers with 7 interceptions and had 40 tackles.

On the court, he averaged 15 points per game last season, helping the Bombers to the state tournament and the best record in Class 6A. Smith said he plans to continue playing both sports this school year.