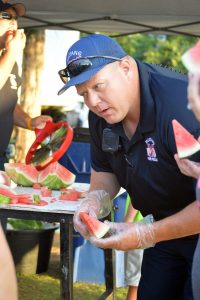 As more and more businesses and organizations, city facilities and government departments reopen or expand operations, Mustang Fire Department’s Freedom Celebration is on track to celebrate the nation’s birthday much in its usual style Saturday.

While for a time there was speculation COVID-19 would shut down the celebration, that turned out not to be the case – as city facilities reopened after the shutdown necessitated by the spread of the virus, they said the annual event would move forward.

This year some things would be different, as a result of planning efforts that took place during that shutdown, city officials said. That primarily centered around the food offered at the event – rather than the usual buffet-style hot dogs, beans, chips and cookies, several food trucks would be on hand; watermelon and water would be provided as usual, City Manager Tim Rooney said in late May.

Many of the things associated with the freedom celebration were in place as of press time. The department’s regular fire truck rides would continue and music would be provided; there would be several activities and other things for children, as well, Rooney said.

Firefighters Freedom Celebration also has a separate purpose – it helps fund purchases not covered by the city’s regular budget. In addition to ticket sales, the department holds a raffle during the event to generate more funds.

Firefighters Freedom Celebration runs from 6 p.m. to 10 p.m., with the city’s annual fireworks display starting at about 9 p.m., or dusk.
Coinciding with this year’s celebration date was the start of legal personal firework discharge in Mustang. City officials said no personal fireworks would be allowed in Wild Horse Park during the annual event. Also, no drones could be flown in the area between 5 p.m. and 11 p.m. that evening.

Firework stands prepare to open for the season

The countdown to Independence Day is on – and, in Mustang that means it’s also the countdown to personal fireworks sales.
A major fundraiser for several local nonprofit groups, stands will open June 27. Several of those organizations selling pyrotechnics have done so for several years; Mustang City Clerk Lisa Martin, who coordinates issuing permits, said some again will set up multiple sale locations.

Mustang Codes allow personal firework sales annually from June 27 through July 3, depending on certain conditions. In the case of a declared county or municipal burn ban, for example, fireworks are not allowed to be either sold or discharged.

Stands must be located not less than 100 feet from a public highway, as required by Oklahoma State Fire Marshal regulations.

Firework stands have different operational hours than those allowed for personal discharge, according to city code. Sales are permitted from 3 p.m. until 9 p.m. June 27 through July 3 and from 9 a.m. until 10 p.m. July 4.

Independence Day. City officials warned residents in Mustang Public School District who live outside the city’s 12-square miles that personal fireworks are illegal in both Oklahoma City and Yukon.