Fireworks are always a favorite in eastern Oklahoma County with most cities allowing for the purchase, possession and discharging during this annual time of celebration. 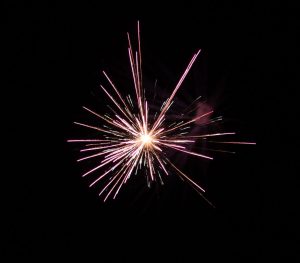 Fireworks explode over the Choctaw area.
(PHOTO BY RYAN HORTON)

Nicoma Park
As set forth by the City Council of the City of Nicoma Park, times and dates for discharging fireworks within the city limits is June 15 through July 6.
June 15 through July 3 – 10 a.m. to 10 p.m.
July 4 – 10 a.m. to midnight
July 5 and 6 – 10 a.m. through 10 p.m.
Fireworks may be shot on your property or with the property owners’ permission (authorization document must be present).
No fireworks may be shot in the street, or on any city owned property. Citizens are responsible for cleaning up the area after finished.
The fine for illegally shooting fireworks during non-authorized times, or places is $155 and is covered under Nicoma Park Municipal Ordinance 11-57.

Harrah
Discharging fireworks is permitted on private property within the city limits of Harrah on July 3 and 4.

Jones
This year the discharging of fireworks on private property will be allowed in the Town of Jones City from June 29 to July 5.
Lawful discharging hours are between 10 a.m. and 10 p.m. each day with exceptions for July 3 and 4 when the deadline to celebrate is pushed back to midnight.