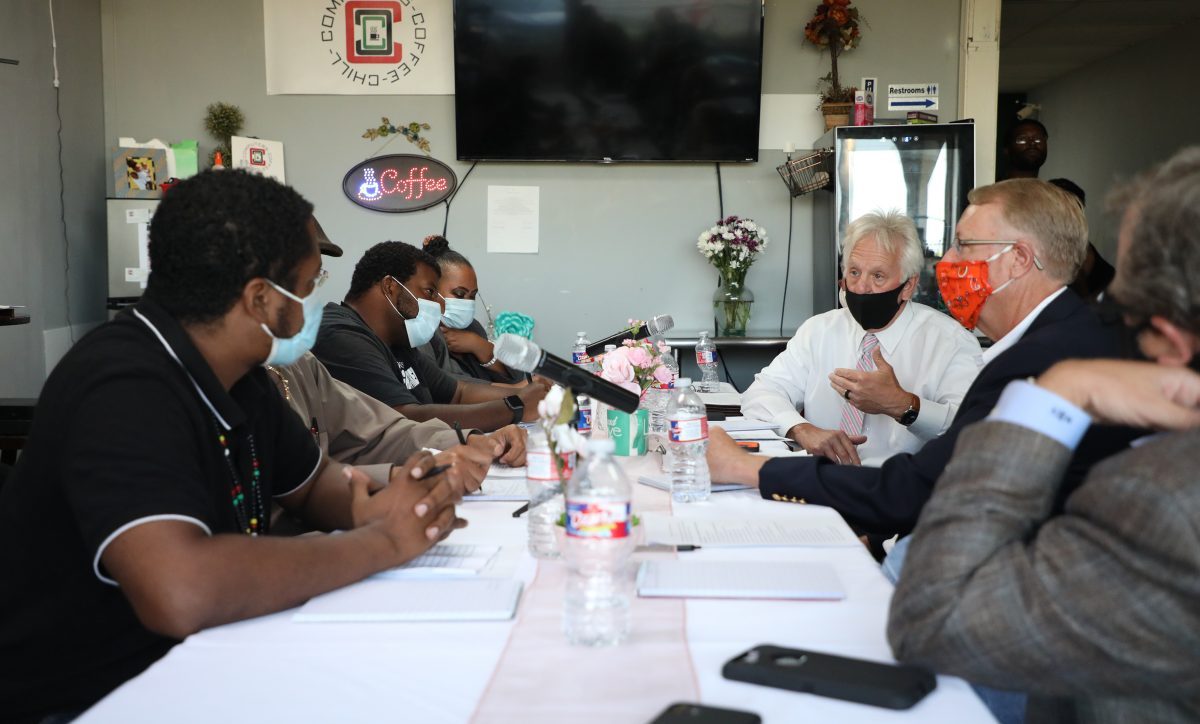 Midwest City officials and members of the Black community talk about racial issues last Wednesday during a panel discussion at Computers, Coffee and Chill in Midwest City. (Photo by Jeff Harrison)

Cooper, who has lived in Midwest City for much of his life, organized the event to improve the relationship between city officials and the Black community. His brother encouraged him to organize it and reach out to Reed, who was Cooper’s opponent in the Ward 4 city council election. Reed and fellow city leaders quickly agreed to meet.

“He (Reed) contacted me back and said everyone was down for it,” Cooper said. “And I want to recognize my brother Lamar for coming up with the idea and putting it together and let’s keep it going.”

On Wednesday night, the group opened the discussion by sharing their thoughts about the relationship between the City and the Black community. 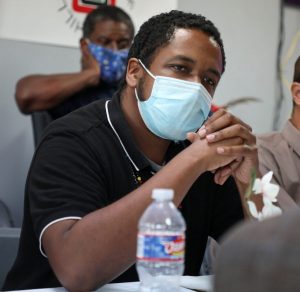 Dukes, who served 31 years with the police department before being elected mayor, said Midwest City is one of the most diverse communities in the metro and has excellent relationships with its African American residents.

“I think we have an excellent relationship and if there is need we try to address it, regardless of where it’s at,” Dukes said.

Rhodes agreed with the diversity of the community but questioned how much money the city spends on policing. He argued that money could be better spent on programs to help those in need and economic development for African Americans.

“Can we talk about shifting some funds or looking at what we can do to help the youth, especially during this revenue failure,” he said.

“This is just a small list and I agree with you.  As we find other issues, we’ll attack it,” Dukes said.

Rhodes agreed in the value of outreach programs, but said the city must also address issues of trauma and negative perceptions of police officers among youth.

Bizzell said she has three sons and the oldest shares those fears about law enforcement.

“I know my oldest son does not feel safe,” she said. “He feels that because of his color of skin and body build that he is seen as a threat.”

Clabes said he does not tolerate officers who use excessive force and violate the law and has fired several for those actions. He acknowledged that police unions have protections for officers but said the city has an amicable relationship with the fraternal order of police. He also said the police community advisory board provides another layer of oversight and transparency, and urged residents to share any concerns with him or their elected officials.

“You have to be involved, you have to let me hear your voice,” Clabes said. “You have representatives through the city, all six wards and the mayor are represented on this. They are the ones that give the oversight.”

One of the issues raised by the Black community representatives was diversity within the police department and city government. 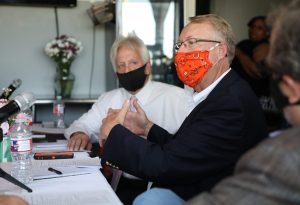 City Manager Tim Lyon speaks during a meeting between city leads and members of the Black community. (Staff photo by Jeff Harrison)

“For the most part, I don’t see many Black police officers on your force in Midwest City,” Washington said. Until we get a diverse group of police officers that are Black with majors, captains, lieutenants we’re going nowhere.”

The Midwest City Police Department has about 100 officers including seven who are African American. Clabes said the force is not representative of the racial makeup of the city, which has about 22% African American population, and is committed to changing that.

“I would love to have an agency that represents this community, but it is very difficult to recruit African American police officers,” Clabes said.

Clabes said they continue to improve that by building relationships with the Black community and encourage African Americans to pursue a career in law enforcement.
Lyon said the city must also do more to build a diverse workforce. He said some departments have more diversity than others but stressed the need for more diversity at the top positions.

While city officials agreed on the need to improve diversity among city staff, they celebrated diversity among elected officials. The seven member council and Mayor included three women and twoAfrican Americans.

“I think that has helped a lot with the decision making, since we all don’t have the same life experiences,” Reed said.

“The NE 10th Street corridor is dead and we have got to put more effort into developing it,” he said.

Lyon said he encouraged anyone interested in opening a business in the city to meet with Robert Coleman, the city’s economic development director.

“Robert Coleman can help small businesses because he knows a lot about financial assistance program and knows the business locations,” Lyon said. 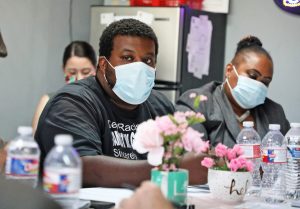 Drew Rhodes speaks about issues in the Black community last week during a meeting with Midwest City leaders. (Staff photo by Jeff Harrison)

Washington agreed with their assessment but said the city needs to do a better job promoting and communicating with residents and business owners about their services.

“How many Black people know these funds exist,” he said.

Rhodes, who is an assistant principal at an alternative school in Oklahoma City, echoed the need for better education. He said schools focus on teaching to standards and many people grow up not understanding how government works.

“We’re too busy teaching to standards like the 50 states and the Civil War and we’re not teaching things like who your representative is and how do you research social issues,” he said.

“The biggest thing that we voted on in the last four months was an apartment project and I took about four or five calls on it,” he said. “I’m not sure I can judge how I’m doing without feedback.  I would be full of myself to say I’m doing a great job. I’m doing the best job I can.”

At the conclusion of the meeting, panelists were asked for solutions. Cooper spoke about the disconnect between city officials and the Black community and said he would like to see the city create a committee for Black residents and issues. He said only one of the 10 largest cities in the state – Tulsa -has a commission for the Black community.

“I think this would be a way to move forward and get more Black people involved,” Cooper said.

City leaders said they support the idea and about holding future discussions like this one.

The full video of the discussion can be seen on Facebook by searching “321 ENT CCC Computers Coffee & Chill.” 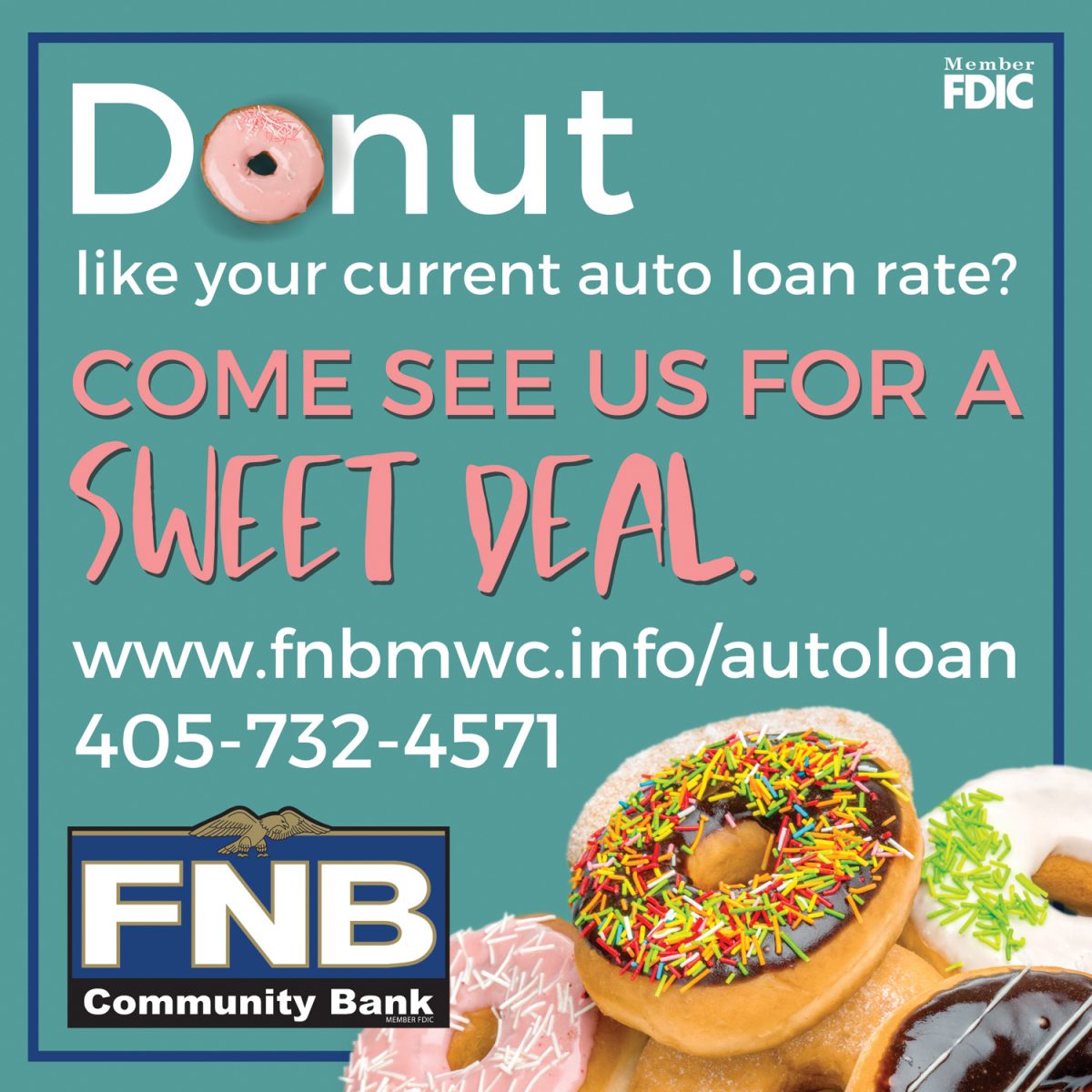