On June 30, Dr. Jim McCharen completed his 48th year in education, and 38 of those years have been in the Choctaw-Nicoma Park School District
The district had a large celebration to mark the day that was officially proclaimed as Dr. Jim McCharen Day within the city of Choctaw.
A banquet that evening ended with a reveal by district officials that the Choctaw High School Activities Center would be renamed in his honor. 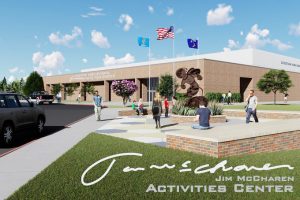 A rendering of how the Jim McCharen Activities Center at Choctaw High School should look. Signage will feature his signature and block letter to be easily read. (IMAGE PROVIDED)

McCharen has served as a classroom teacher, coach, the athletic Director, the high school principal, the assistant superintendent and the last eighteen years as the superintendent.
After being an assistant football and baseball coach in Moore for six years, McCharen came to Choctaw High School in 1979.
He was the offensive coordinator for the Yellowjacket football team and the head baseball coach. During his six years as the Choctaw football offensive coordinator, the Yellowjackets went to the playoffs five times and the State-Quarter Finals in 1981.
McCharen was the Choctaw High School baseball coach from 1980 to 1987.
During that time, the Yellowjackets won 204 games and lost 64 for a winning percentage of almost eighty percent. McCharen’s teams averaged over 25 wins a year. Under McCharen, the Yellowjackets won numerous tournament championships, conference championships, and regional championships and were State-Semi Finalist in 1982 and State-Runner up in 1981 and 1987.
The 1987 Yellowjacket team was ranked the number one high school baseball team in the United States for most of the season. During his coaching tenure, McCharen had four players that went on to play professional baseball. He won numerous local, state, and national coaching awards. 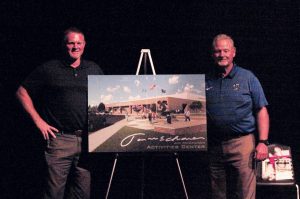 McCharen was inducted into the Choctaw High School Athletic Hall of Fame as a Coach in 2013. Many former players and community members still refer to him as “Coach” McCharen.
During McCharen’s 18 years as superintendent CHS athletic teams, academic teams, and fine arts programs have  won  thirty-one State Championships and ten State-Runner Ups.  In addition, during  the  same  eighteen-year  period   CHS  teams  have won  twenty-seven  Athletic Academic State Championships. 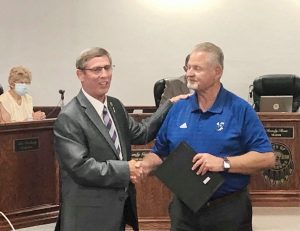 Last Tuesday Dr. Jim McCharen completed his 48th year in education, and 38 of those years have been in the Choctaw-Nicoma Park School District.
His last day as CNP superintendent was June 30, officially declared Jim McCharen Day in Choctaw, and it was a day full of festivities.
Despite limitations of social distancing efforts due to the COVID-19 pandemic, the community celebrated the living legend of Choctaw-Nicoma Park Schools.
Hundreds attended a surprise drive by parade at the CNP Administration Office and the day was capped with a banquet celebrating his tireless dedication to education.

Guests were kept limited for social distancing inside the CHS Performing Arts Center, but many were still able to attend and show their support.

The banquet ended with a reveal by officials the CHS Activities Center would be renamed in his honor.
McCharen has served as a classroom teacher, coach, the athletic Director, the high school principal, the assistant superintendent and the last eighteen years as the superintendent. 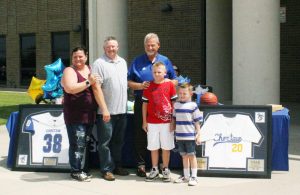