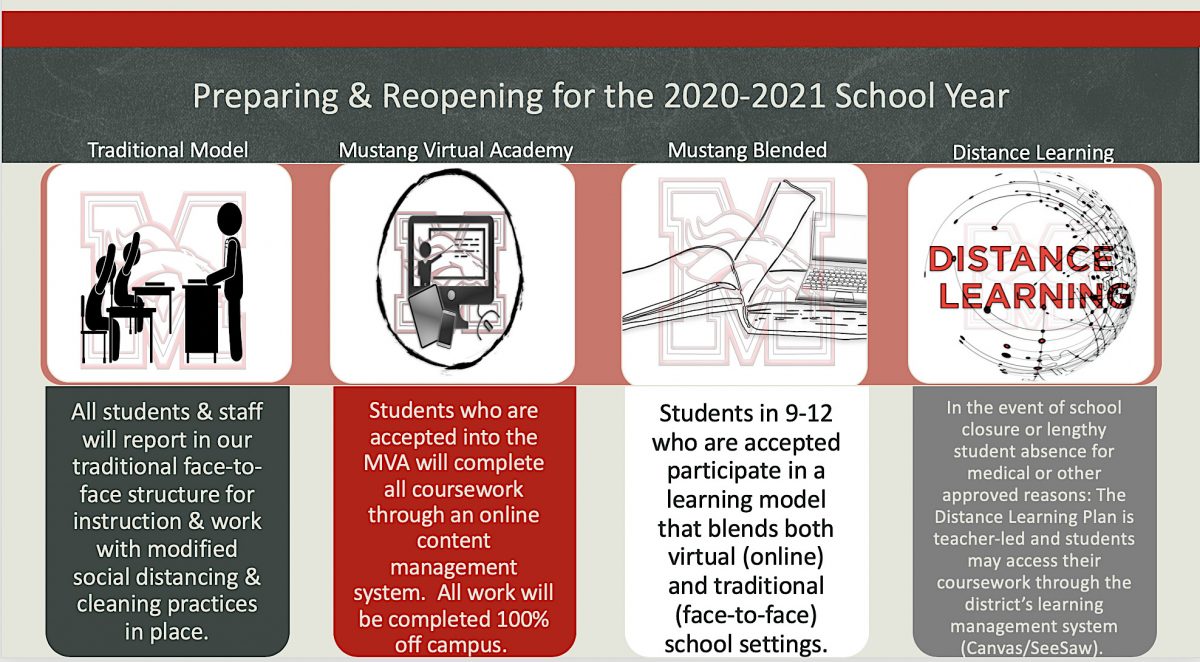 If the district’s Board of Education adopts the proposal during its July 13 meeting, that means Mustang would adopt three styles of instruction – for students who wish to attend classes in person, as usual, that would be possible, while those who feel more comfortable with distance learning can do that.

High school students only would have a third option, a blended curriculum that would allow those individuals to take both virtual and in-person classes, officials said.

The proposal would be available through Mustang’s new M.O.R.S.E.Y. – Mustang’s Options for Reaching Students and Educating Youth – plan and reflects the “most current thinking” on how the return to classes Aug. 13 would look, district communications director Kirk Wilson stated in a release.

The move was made after Mustang administrators sent a survey to families across the district. Responses indicated nearly half of parents had at least some level of uncertainty about the safety of their children, should they attend classes in person, as historically held. Staff members also weighed in about how the new school year would look, Superintendent Charles Bradley stated in the release.

The proposal “traditional model” would involve the resumption of classes as normally held five days a week; Mustang’s Virtual Academy represented the district’s 100% learning option, said Ryan McKinney, Mustang assistant superintendent of secondary schools. Mustang Blended would be the name for a program available to Mustang High School students only, he said.

As of press time, on in person event was expected to go forward – the July 25 graduation ceremony for the Class of 2020, set at Bronco Stadium. Other in person activities like athletic and band practices continue, although some in recent weeks were derailed as positive COVID-19 cases began to surge across the state.

Mustang school officials announced two student athletes – a boys basketball and football player tested positive for COVID-19, as did an assistant coach; those practices were suspended for 14 days, administrators said. Most recently the Mustang High School Cheer fireworks stand was closed over the weekend, after “several students” also tested positive.

Wilson – subsequent to the athletic positive test announcements – June 30 sent an email to the Times advising it would no longer “announce or detail each positive case of COVID-19 as it may arise,” only publicly advising of activity suspensions, closings and the like.

Wilson advised in the July 7 release the new learning plan would feature a health and safety plan, something questioned by several individuals commenting on Return2Learn after the district posted the proposal Tuesday morning. More information would be available after the July 13 board meeting, officials said.

More information about the plan is available online at http://www.mustangps.org/MORSEY.aspx; further details will be posted on the Times’ website and social media pages, as well as next week’s print issue.