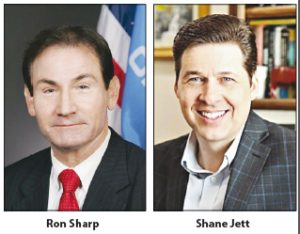 Sharp has had to win his way through a runoff election before, but he’s never been so aggressively targeted by his opposition.
“I want to thank those who voted for me in the June 30 primary. In 2012, I came in second in the primary and bounced back strong to win the August 2012 runoff election. I have been here before,” said Sharp. “In the next two months there will be considerable scrutiny of the two candidates seeking to win the run-off election on Aug. 25. I want to express my respect to Brandon Bumgarten for having the courage to run for an elected office. I certainly believe Brandon will be a force in the future political arena. He is a very talented young man.”
The incumbent believes his recent success in the legislature fighting for accountability and transparency has made him the target of some wealthy and corrupt challengers.
The district attorney is currently investigating alleged “dark money” materials used to campaign against the state senator.
“The accountability and transparency to taxpayers of all Oklahoma dollars spent is my commitment. My support for public education will be my last stand- which includes local control by its elected school board,” said Sharp. “There will be ‘Dark Money’ groups that will continue to deceive SD 17 voters with mailers, text messages and manipulating voter polls in order to elect those who have pledged allegiance to their scheme to pocket public funds.”
Jett was the first Republican to ever win Oklahoma House District 27, and he served six years.
He says he’s not running to oppose Sharp, but is instead believes he could be a great asset for SD 17.
“I never run to oppose another candidate, but rather run for an opportunity to serve our community based on the skills and experience I have to offer,” said Jett. “Since I left public service in 2010, I have dedicated myself to financing job creation in Oklahoma and continued my service in the United States Navy. After prayerful consideration, I am compelled to run for this seat.”
Whoever wins the Republican nomination will face Libertarian Party candidate Greg Sadler in a Nov. 3 general election.