Current Oklahoma County Sheriff P.D. Taylor, 73, will face Norman police officer Tommie Johnson, 31, in a Republican runoff election this August.
June 30 Republican primary results show Taylor secured 29,447 votes (48.3 percent), while Johnson received 15,836 (32.99 percent).
Mike McCully, 63, who was recently fired by Taylor for misconduct, finished third with 11,407 votes (18.71 percent), and he immediately put his endorsement behind Johnson.
“I am proud to endorse my friend and brother in blue,” McCully wrote on his campaign’s Facebook page. “P.D. Taylor has to go! Oklahoma County needs a new sheriff in town!”
The winner Republican nominee will face Democratic candidate Wayland Cubit, a lieutenant with the Oklahoma City Police Department, in the November general election.
In the June 30 Democrat primary Cubit (62.37 percent) defeated Virgil Green (37.63 percent).
Taylor took the helm of the Oklahoma County Sheriff’s Office after longtime Sheriff John Whetesl resigned in early 2017. He was first elected sheriff in a special general election in September 2017 with 49.9 percent of the vote, totaling to 23,049 votes.
He’s worked for the OCSO for a total of 23 years, and prides himself on reducing costs within the office and streamlining the agency’s budget.
“Since being elected it has been my priority to work with my staff and make sure we are keeping citizens safe, we’ve made significant improvements to the jail, and we have done it all with the understanding that transparency for this agency is important to building community trust,” said Taylor. 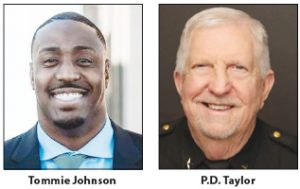 Johnson began his law enforcement career at the University of Oklahoma and joined the Norman PD in 2015. He earned the rank of Master Police and was awarded with the department’s Centennial Award.
Johnson states, if elected, he would focus on four key themes: safer communities, fiscal responsibility, partnerships and progress.
Cubit is a 21-year veteran of the Oklahoma City PD. He has devoted the past 12 years of his career to creating and supporting programs that help at-risk-youth.
“I truly feel like I’m the one who brings the background the community can get behind and trust. We’re talking about community policing not just from a unit, but we’re talking about agency-wide community policing,” said Cubit.
Oklahoma County has never had a Black sheriff, and three of the five initial candidates in the race are Black. Two remaining candidates are Black.
In Oklahoma County, the sheriff’s office is primarily responsible for patrolling rural areas and judicial services. The OCSO also provides assistance and services in local municipalities such as Choctaw, Midwest City, Del City, Harrah, Jones, Nicoma Park, Spencer, Luther, Arcadia and Oklahoma City.
Beginning this month, the OCSO gave up longtime control of the Oklahoma County Jail as the Oklahoma County Jail Trust, created a year ago by the Oklahoma County Commissioners, officially took the helm of jail operations.