Del City police are investigating after an off-duty Langston University police officer opened fire on a suspected shoplifter outside Walmart on Saturday.
According to police, the off-duty officer was working as a private security guard at the Del City Walmart when he spotted someone trying to shoplift items from the store. The suspect allegedly bought several items and tried to steal others, but left them inside when an employee stopped him. 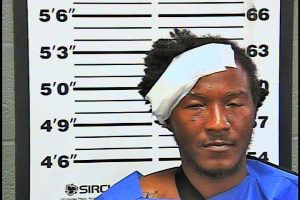 Kenneth Simmons was shot by an off-duty Langston University officer after allegedly shoplifting at the Del City Walmart on July 4. (Provided photo)

The off-duty officer chased the suspect, later identified as 28-year-old Kenneth Lee Simmons, to his car and tried to physically pull him out of the vehicle.
Simmons was able to put the car in reverse and allegedly struck the officer with an open car door as he tried to drive away. The officer then fired several rounds at the fleeing vehicle.
A witness recorded the altercation and shooting on a cell phone video.

Simmons drove to a nearby family members house and was transported to a local hospital. He was treated for gunshot wounds, which were non-life-threatening, and later released.
Simmons was arrested for assault and battery with a deadly weapon and petit larceny. He also had outstanding felony warrants, police said.

Maj. Brad Rule said they are still investigating the case and will present their findings to the District Attorney’s Office. The DA will determine if it was a justified use of force.

“We will investigate this just like any other use of force,” Rule said.

The police department will not release the name of the officer until after the case is reviewed.