Relief has finally arrived to hundreds of people needing help with unemployment claims.

The Oklahoma Employment Security Commission hosted several claim processing events over the past week at the Reed Conference Center in Midwest City. The events were designed to help claimants who have outstanding needs or require in-person assistance with claims.

“It’s been a mixed bag of issues here,” said Shelley Zumwalt, OESC Interim Executive Director. “We’ve seen people that do not have strong computer skills and need guidance. Some people need an interpreter and some have never attempted to file a claim.”

The OESC has struggled to keep pace with a record number of unemployment claims, caused by the COVID-19 pandemic and business restrictions. Zumwalt said the biggest cause for the slowdown is the agency’s antiquated mainframe system. 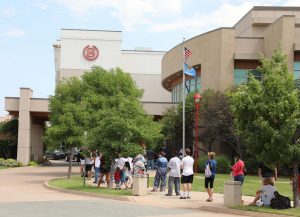 People wait outside the Reed Center during an unemployment assistance program. (Photo by Jeff Harrison)

A common thread among those waiting at the Reed Center has been lack of communication with OESC staff. While many people have been able to complete their claims online, others have been unable to reach OESC staff by phone when troubles arise.

Penny Williams, of Moore, filed for unemployment April 4 but said she has been unable to speak with someone about problems with her claim. She was out of work for about four weeks and is still working reduced hours.

“I filed online and it locked up and won’t let me do anything,” Williams said. “I called about 21 times without a response. I felt extremely helpless and extremely frustrated. But you can’t take it out on the people on the phone.”

Williams met with an OESC employee last Wednesday who was able to quickly resolve the problem and expedite her claim.

Tavis King, a barber from Midwest City, was also in limbo after being out of work for two months. He said he submitted a claim with the state, but learned last week that he needed to file through the Pandemic Unemployment Assistance, a program that expands unemployment benefits to self-employed workers, freelancers, independent contractors, and part-time workers impacted by the coronavirus.

“They gave me a tracking number when I filed for unemployment but I could never get ahold of anyone,” he said. “When I heard they opened up the unemployment office I came up here.”

Melissa Gray, of Midwest City, said that when she filed for unemployment she learned someone else had already filed a fraudulent claim under her name. Gray, who worked as a delivery driver and a nanny, has been unable to get past the roadblock or get help from OESC employees with the issue.

“I’ve been trying to get unemployment since the middle of March,” she said. “When I call, they say they don’t have any information and someone else needs to call me back. But they never do.”

Officials organized the Midwest City events after hundreds of people lined up outside the agency’s office on Lincoln Boulevard in Oklahoma City. Zumwalt said the office did not have the space to accommodate large crowds.

They kicked off the claim processing event last Wednesday and Thursday and were greeted by a long line of people that wrapped around the block to the nearby Home Depot store. Staff help 500 people each day. The next people in line can get a “front of the line pass” for the next day.

OESC staff helped more than 1,000 people in the first week. The claim processing event was open again this Monday through Thursday from 7 a.m. – 7 p.m.

About 60 employees are helping with the events. Zumwalt said they have not hired additional staff but brought in employees from other cities to assist.